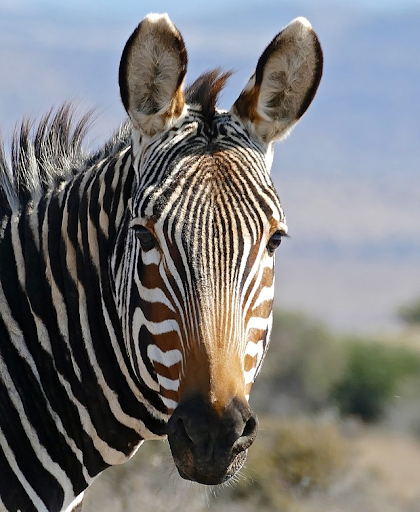 Yes, living with a nasty, incurable, rare disease is horrible. It is also very funny. Or, perhaps, I have a gallows sense of humor.

(Before I start this, let me say, since I’ve received my diagnosis, all my doctors have been infinitely kind and caring. I wish all the doctors before the diagnosis had been the same. But that’s another story.)

How doctors respond to me and Ehlers-Danlos Syndrome.

When I meet a doctor for the first time, they usually have not looked at my chart. I understand—too many patients, too little time. After greeting me, they say, “So what brings you in today?” I smile my I-hate-to-do-this-to-you-smile and say “I have Ehlers-Danlos Syndrome.” Doctors respond in many ways.

1. The doctor blinks. He/she blinks because the diagnosis rings a vague alarm bell in their mind. But only a vague one. The doctor makes polite conversation and excuses themselves. While I wait, they are Googling EDS on “Google for Doctors.”

2. The doctor is disconcerted by getting stuck with an Ehlers-Danlos Syndrome patient. “So, you have ED…”

I try really, really hard not to laugh. In some alternate, doctor world, maybe ED is an acronym for EDS. But in the patient world, ED stands for something else, and I don’t have it.

3. They pale. My favorite response is the doctor who said, “I read about it in medical school. So, um, why don’t you tell me whatever it is you need, and I’ll greenlight it.”

Doctor: You are on a lot of medications. How do you feel about that?

Doctor: Oh, right. Good. So, these medications are propping you up.

5. The doctor pulls up my x-rays: Doesn’t say a word because he/she is gasping. A second later, he/she is figuring out how to pretend they didn’t gasp.

I know it’s a Friday Five, but this is your lucky day because I have six.

6. The doctors perform a procedure (or surgery): These always go wrong. Really, really wrong. When I am awake for the procedure—not often the case—but when I am, I hear the assisting resident say to the other doctor, “Did you see that? What the *%#* happened?”

I tried to warn them beforehand. Honest, I did.

Nota Bene: I included the cute zebra photo because zebras are the mascot for EDS. The photo is from Wikimedia Commons.

I was eager to read Cloud Cuckoo Land because I loved Anthony Doerr’s previous book, All the Light We Cannot See. While Cloud Cuckoo Land is a very different type of novel, it is just as beautiful and will stay with you for a long time. In fact, I wish it were already widely available because I want to discuss it with others. 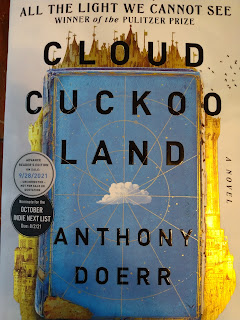 What makes this novel consuming? Again, the novel is beautifully written. The sentences are lyrical without drawing attention to themselves. The plot is well-crafted, and the characters are engaging. But what sets this book apart is that it asks the reader to consider deep philosophical questions about truth, suffering, and the value of story. It has been a long time since I have read a novel that has raised so many thoughts and questions.

That said, CCL starts off a bit slow—in spite of a compelling opening—because the novel has four point-of-view characters, excerpts from an ancient (fictitious) Greek epic, and multiple times periods. While that can be hard to absorb in the beginning, all the characters and settings are fully realized and engrossing. I loved traveling between 2020 America, 1453 Constantinople, and a futuristic spaceship.

I won’t attempt to summarize the plot, but you can read a summary here.

Bottom line, I highly recommend this novel both for the story itself and its profundity. Five stars.

Nota Bene: I received an ARC (advanced reader copy) of this novel from Scribner.
Posted by Connie Keller at 9:28 AM 1 comment:

My husband and I recently attended a conference in Maine. (One of two states I haven't been to. The other is Louisiana.) Here are some photos from a hike we took. 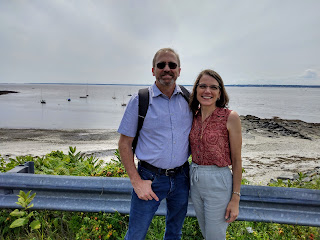 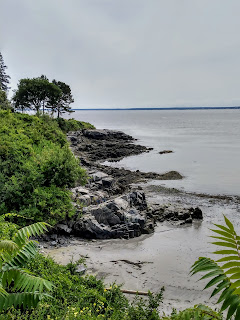 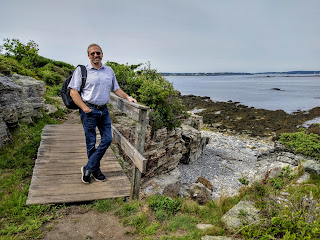 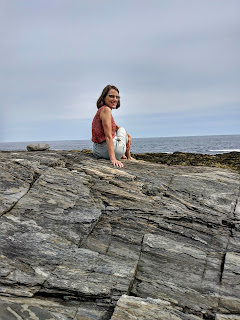 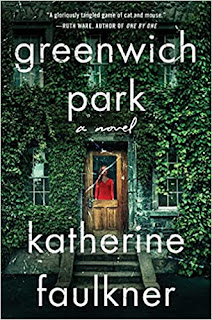 Book Blurb:  Helen’s idyllic life—handsome architect husband, gorgeous Victorian house, and cherished baby on the way (after years of trying)—begins to change the day she attends her first prenatal class and meets Rachel, an unpredictable single mother-to-be. Rachel doesn’t seem very maternal: she smokes, drinks, and professes little interest in parenthood. Still, Helen is drawn to her. Maybe Rachel just needs a friend. And to be honest, Helen’s a bit lonely herself. At least Rachel is fun to be with. She makes Helen laugh, invites her confidences, and distracts her from her fears.

But her increasingly erratic behavior is unsettling. And Helen’s not the only one who’s noticed. Her friends and family begin to suspect that her strange new friend may be linked to their shared history in unexpected ways. When Rachel threatens to expose a past crime that could destroy all of their lives, it becomes clear that there are more than a few secrets laying beneath the broad-leaved trees and warm lamplight of Greenwich Park.

The novel is written from three different viewpoints, which is a hard thing to pull off. But Katherine Faulkner does it well. Each character (Helen/Serena/Katie) has a distinct voice but still remains nuanced and intriguing.

The plot is well-crafted and satisfying. And the pacing is spot-on—I had a hard time putting the novel down.

Bottom line, I give Greenwich Park a five-star review, and I’m eager to read this debut author’s next novel. I do need to add a trigger warning: Part of the plot includes the traumatic aftermath of a rape, though the crime itself does not occur within the scope of the book.

Late Summer Flowers and a Book

In space between mid and late summer, few plants bloom. But I found some in our gardens to share. I've included a book snapshot at the end because I love nothing better than to get caught up in a good book in the languid days of summer (or the orange light of autumn or the snows of winter or the fragrance of spring). Okay, every season is a great time to read. 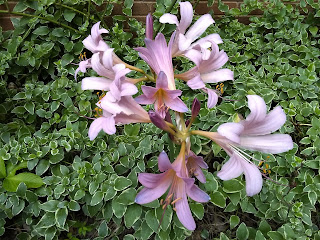 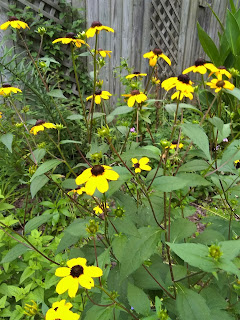 Posted by Connie Keller at 9:45 AM No comments:

Writing is my true love. But a close second is gardening. When my characters are misbehaving or I feel blocked, pulling weeds, pruning shrubs, or cutting flowers (by far my favorite garden activity) is the tonic I need.

Two years ago, I experimented with wildflowers. I started small with a mix, which promised year-round perennial wildflowers. 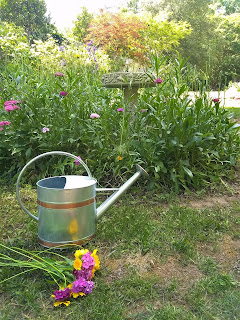 When I saw how much the bees, butterflies, and hummingbirds (and I) enjoyed the flowers, I decided to plant a bank of wildflowers. 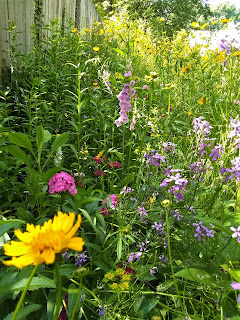 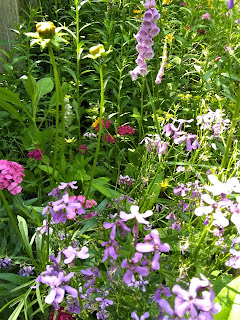 When I cut flowers to bring inside the house, the bumblebees grumble. 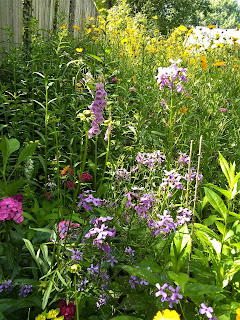 In the fall, when the flower seeds ripen on the stalks, goldfinches descend in clouds of golden glory to gorge their bellies.
Posted by Connie Keller at 6:20 PM 1 comment:

Death Valley, it's not what you expect

I've lived in California three different times, and not once was I tempted to go to Death Valley. That was a mistake.

I assumed it would be sand, sand, and more sand. After all, it's in the Mojave Desert and has the highest recorded temperature in the world: 134 F. And while it had incredible sand dunes, it was so, so much more.

We hiked into Mosaic Canyon. It's a slot canyon, so sections are very narrow.

Then, there were the mudflats. (Parts of Star Wars, A New Hope were filmed in DV, so some vistas, like this one, looked very familiar.)

And, least expected, an oasis. Deep in Death Valley.

And, because I can never have a post without a metaphor, it reminded me of a good book. How it takes what you expect--desert and sand--and turns it into soaring rock, narrow twists, and unexpected rest and joy.

Posted by Connie Keller at 10:40 AM No comments: