Gatlinburg, Just Another Day in Bearadise

Thursday at 3 am, I woke up to banging. At first, I thought the kids were playing pool, and though 3 am isn’t an appropriate time to play pool, I thought that maybe they couldn’t sleep.

Then, the sounds got louder and louder and followed by thuds, and I thought maybe one of the kids was sleepwalking and fell.

Then, there was a loud boom, and Calvin woke up. He said, “The raccoons are in the garbage.” We did have a raccoon in the garbage the night before.

As Calvin and I walked to the back door (the trash cans were on the second-floor deck), I said, “Sweetheart, that must be a family of raccoons to make that much noise.”

I switched on all the lights. The noises became very loud. I said, “Baby, be careful.”

Calvin unlocked the door and peeked out. “Uh, Connie, the trash can is gone.”

I said, “You’ve got to be kidding. That was a massive rubbish can.”

Calvin: “See for yourself.”

So I did. The trash can lid and the slate rock that we put on top of the can to keep out the raccoons were nicely laid on the deck floor. And the trash can was gone.

Cal turned on a flashlight, and we peered over the edge of the railing. Down on the ground was a black bear feasting on our garbage. Cal and I debated the size of the bear. I leaned toward 250 lbs. Cal pointed out that the bear was more than two stories away from us and probably weighed closer to 400 lbs. (According to Wikipedia, black bears can weigh anywhere from 160 to 550 lbs.) Maybe Calvin was correct.

This hulking animal had to have climbed a tree and then leapt onto the deck. Happily situated on the deck, he removed the slate rock and the trash can lid. When I turned on the lights, he tossed the trash can over the railing and climbed down to finish dinner.

I called the State of Tennessee Bear Sighting hotline. They took down all my information for the bear tracker/relocation specialist.

Apparently, my new friend will be moved to the Cohutta Wilderness, which is where the “naughty” bears are relocated. I'm hoping that the process is anonymous—the Cohutta Wilderness is only 60 miles from our home in Chattanooga, and I’d prefer it if my bear buddy didn’t renew our friendship.

N.B. We ended up seeing 9 different bears (including the cute one on the right) during our trip to Gatlinburg this year. Because of the wildfires in November 2016, there is significantly less food available this year and the bears are becoming bolder to get the necessary body fat to survive the winter. We spoke to a local woman who told us that bears are figuring out how to open doors—her brother found a bear inside his truck because it had opened the door.
Posted by Connie Keller at 3:36 PM 2 comments: 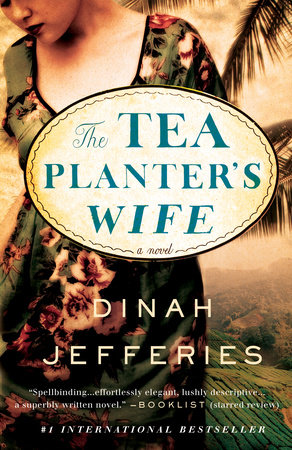 The Tea Planter’s Wife by Dina Jefferies is a Rebecca meets Jane Eyre set in Ceylon in early twentieth century.

As a historical novel, Jefferies has done a wonderful job of recreating the Ceylon of the 1920s and ’30s vivid detail, both in terms of the lush physical setting and the cultural milieu. The author does so cleanly by integrating the details into the action and character development, so the reader isn’t tempted to skip paragraphs in order to “get back to the story.”

Another aspect that I appreciated was the raw and honest look at a loving marriage. While there are many secrets and lies in Gwen and Laurence’s marriage, they truly love each other. The readers sees that not only in the sacrifices the characters make, but also in the physical love they have for each other, which I found very refreshing. Often, it seems that the last “taboo” in novels is sexual delight between married people. That said, there are many frank instances of sex between the couple, but the scenes avoid eroticism.

The only difficulty I had with the novel was that the author occasionally lapsed into telling the reader things that could be gleaned from the text. Though that happened less often in the second half of the novel.

All in all, a very enjoyable book. I’d give it 4.5 stars. And I’ll definitely read other novels by this author.

I received this book from Blogging for Books in exchange for a review.
Posted by Connie Keller at 9:14 AM 1 comment: