If you're a reader of my blog, you know my husband Calvin is an artist. Here is his latest work. 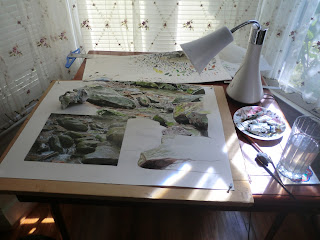 Here is the painting in process. He paints from photographs. This photo was taken by our soon-to-be daughter-in-law Lydia in the Great Smokey Mountains. 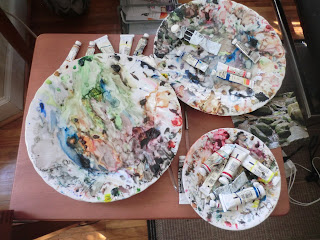 Here are Calvin's palettes. He prefers to use fine china because the water blends better and clings to the china finish. 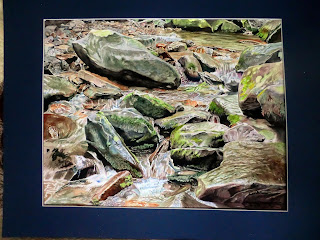 Here is the final painting. (Sorry, I don't have the best camera.) But it gives you a sense of his work. Click on the photo if you want to see it enlarged. 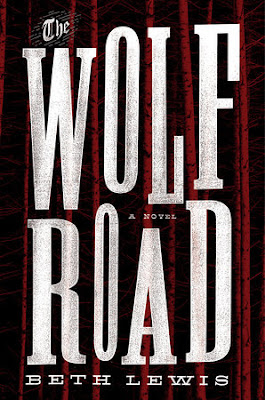 Imagine for a moment, you are among the treetops in a dystopian wilderness, hiding from the foster father you loved, who saved your life. But he’s also the devil who corrupted your soul and is out for revenge. Now imagine you have a knife in your hand, and you can throw it very well.

In The Wolf Road, debut novel of Beth Lewis, the main character Elka finds herself in exactly this situation. After this heart-rending opening scene, the novel traces how Elka ended up as both the hunter and the hunted. It’s dangerous for an author to give the reader a glimpse of the climax at the beginning of a novel. Often, it steals from the impact of the ending, or it slows the action and lessens the tension when the story goes back to an earlier time in the life of the characters. Thankfully, Lewis avoids this by writing a tightly paced novel with well-developed characters.

I loved the growth of Elka from a frightened child to a mature woman who comes to terms not only with the horrors committed against her, but the ones she has committed. Ultimately, this makes the novel a story of redemption. But its ending is not without pain and suffering, and I couldn’t help but imagine the characters’ haunted lives long after the pages of the novel had ceased. The fact that I was so invested in the characters is the main reason I’m giving this novel 4.5 stars out of 5.

One caveat, this is a novel for adults. The story has violence and adult situations, though the author handles them well and avoids wallowing in graphic detail.

I received this novel from Blogging for Books in exchange for an honest review.
Posted by Connie Keller at 3:14 PM No comments: 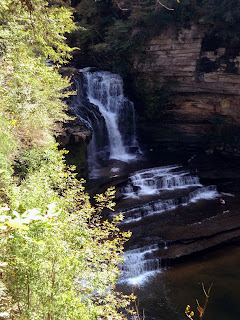 My husband and I love hiking. So we're game to go anywhere and try anything.

And when I mentioned a place called Cummins Falls, my husband was eager, even though it was a two-hour drive, each way, down back roads with no names. And even though it was in the 80s and we had to take the vehicle affectionately known as the "sweat mobile." (It has no air conditioning.)

But Cummins Falls was worth it!

To the left, is a photo I took from the top of the gorge before we hiked down. 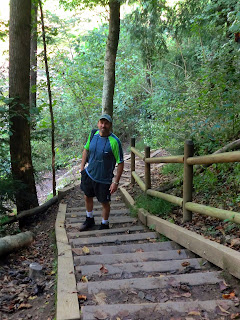 It was a long way down. Thankfully, there were steps on some steep sections. Because of foreshortening, you can't tell how steep this is--the rises between the steps were often well over 18 inches. I felt like I was on the Stairs of Cirith Ungol. Especially on the return when everything was uphill. 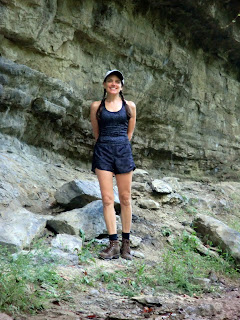 On our way hiking up the gorge to the falls.

Here is my husband putting his boots back on. We had to ford the river a couple of times. 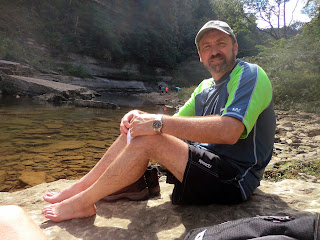 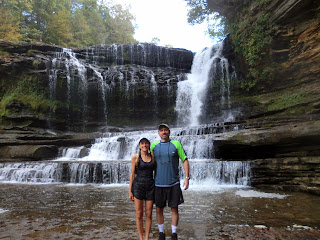 Once we reached the gorge, we climbed up part of the waterfalls. And an another adventurous climber took our photo. 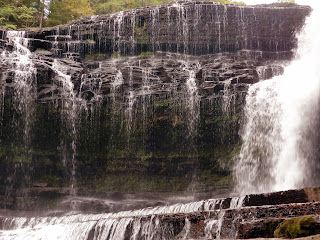 Even though we are in the midst of a severe drought in Eastern Tennessee, the falls were gorgeous. 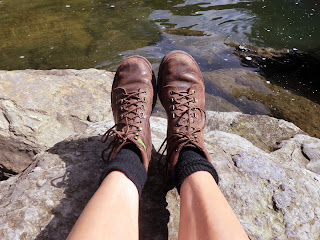 Couldn't close the post without a shot of my hiking boots. These shoes have given me more than twenty years of hiking pleasure. And have seen their share of bears and stepped on more than one rattlesnake--though those are other stories.
Posted by Connie Keller at 6:56 PM No comments: