Every summer for the last nine years, our kids have participated in the Homeschool Shakespeare Troupe. It has been a wonderful experience. Sadly, this is the last year for us. Matthew will turn nineteen in August and he'll be too old. (Even though he was in college this past year, he was allowed to participate because he doesn't turn nineteen until after the play.)

This summer Matthew tried out for a smaller role because after his cardio-thoracic reconstruction, he wasn't sure what his physical limitations would be. Matthew got the role of Bottom in A Midsummer Night's Dream. For those who haven't read the play, Bottom is a peasant weaver whom Puck gives an ass's head.

So Matthew needed a peasant costume. And a donkey's head.

Here's the costume. (Because Matt's a peasant, I couldn't sew a fancy costume, but I used a wonderfully soft moleskin fabric.) 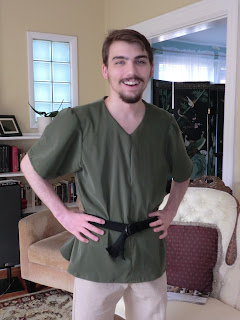 The donkey's head was much more of a challenge. But I took this... 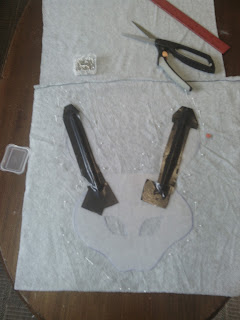 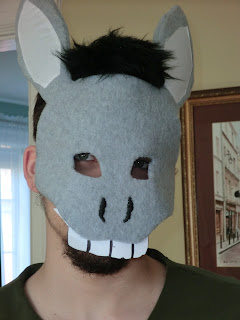 Not bad. But the director (whose husband is an engineer) had a much grander and better idea. Now this is a donkey's head! Plus, the audience will be able to see Matthew's facial expressions. 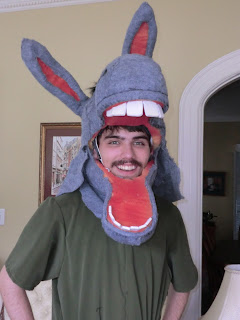 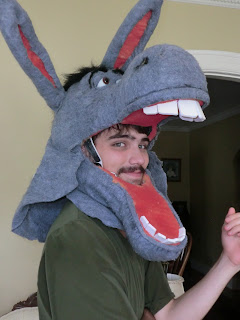 Plug for the play: it's Saturday, July 25, at 2pm
at the University of Tennessee, Chattanooga, Fine Arts Center.

The Little Paris Bookshop is the story of a lost man, Jean Perdu. Two decades earlier, the love of Perdu’s life walked out on him and his life stopped. This novel tells the story of how Perdu comes to life again.

The rebirth of Jean is delightfully mirrored in the reanimation of his senses: sight (Paris, the Seine, Provence), sounds (singing, tango music, soughing winds), tastes (wine, new potatoes with rosemary, the thirteen Christmas desserts of Provence), smells (lavender, books, skin), and touch (the grit of sand, the kiss of the sun, the touch of a woman).

This revelry of the senses grounds Perdu as love is reborn in him. Love of the physical world, his friends and family, and, of course, a woman. And, while I’m not a fan of romance novels (I thought this novel was literary fiction when I requested to review it.), this is a beautifully written story. The characters are engaging, the pace is fluid, and the sense of place envelopes the reader.

While the book ends a bit too cleanly for my personal taste, I do believe that any reader who enjoys exceptionally well-written romance would delight in this novel. In light of that, I give this novel five stars and my recommendation.

"I received this book from Blogging for Books for this review."

NINA GEORGE works as a journalist, writer, and storytelling teacher. She is the award winning author of 26 books, and also writes feature articles, short stories, and columns. The Little Paris Bookshop spent over a year on bestseller lists in Germany, and was a bestseller in Italy, Poland, and the Netherlands. George is married to the writer Jens J. Kramer and lives in Hamburg and in Brittany, France.www.nina-george.com@nina_george • @jean_perdu
Posted by Connie Keller at 12:50 PM No comments: