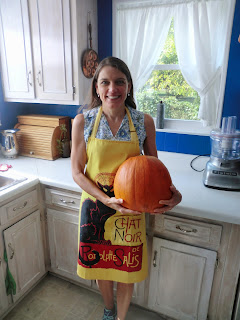 As mentioned in the last blog post, I like to eat wonderful food. Three years ago, to celebrate our 25th anniversary, my husband Calvin took me to Paris. It was an indulgence in art, architecture, and food.

Les Papilles was one of the restaurants we visited. And a few years ago, I found a recipe that they'd posted online. It was for cream of pumpkin soup. Not something I’d normally be interested in. But I had cream of squash soup in their restaurant. I hate squash, but the soup was gastronomic bliss. I printed the pumpkin recipe.

After all three years, I finally made the soup.

My husband is on sabbatical, so I had a sous chef/dishwasher available. Very handy, because whenever I make anything “weird,” my sons need an “alternative food opportunity.” Tonight, it was andouille sausage.

What I didn’t notice three years ago is that Google had put the recipe through Google translate. I could have cooked from the French recipe. The "Franglais" recipe—that was harder.

For example, I’m not sure what “have harmoniously” was supposed to mean. And then there were the words that were neither French nor English...

In the end, the soup was pumpkin nirvana. Instead of andouille sausages, my sons had second helpings of cream of pumpkin soup.

Come Edit Me, My Darling

Two blog posts ago, I mentioned that I signed with literary Chris Bucci of the McDermid Agency. (Still so amazing to be able to say it.) And then, I got down to revisions. At minimum, I worked 5 hours a day on them. Or at least, until my brain got foggy and I began confusing plot elements. Then, it was “back away from the computer slowly, hands above your head.” (I’ve made the mistake of editing with muddled brain before—it’s not a pretty picture.)

In any case, I got the revisions sent off. And it was time to wait. Here’s what I did while I tried not to think “what if my revisions suck?”

2. I did yard work. (And listened to podcasts on my phone. I love Writing Excuses.) Weeding was one of the first things, I did. So, when my husband asked me at breakfast what I was going to do that day and I said “edit the garden,” he didn’t bat an eyelid—he’s awesome like that. I’d post a photo of the garden editing, but suffice it to say, I was wearing painted-stained shorts, a tank top, gardening gloves, and earbuds while wielding a big shovel and spray tank of Round-up. Not the coolest photo op.

3. I found my thoughts straying to my revisions. And redoubled my efforts to think about something—anything—else.

4. I studied some Dutch. My mother is from the Netherlands, so I grew up speaking the language. But I’ve never had a good command of Dutch spelling or reading. Plus, I speak a nearly archaic version of the language—think, King James/Shakespeare version of Dutch. When native speakers hear me, they always think/say, “Oh, you’re so cute.” Cute is never what I’m going for.

5. Cooking. I don’t love to cook. But I love weird food and exotic flavors. (As does my husband. Though our youngest boys scowl at my culinary forays, convinced that one day I’m going to serve them toasted baguette with cocoa-cockroach spread or lemon-thyme braised goat testicles.) Anyway, I’ve been dying to make muhamarra, which is of Turkish/Levantine origins. It took me a while to collect all the ingredients—some were weird, like sumac, which is a beautiful deep purple and tastes a bit like lemons, only more sophisticated. So, you know, lemons from SoHo.

6. And last but not least, I found myself daydreaming about my new novel. The completed rough draft that now calls to me. Begging and whispering sweet promises, like “My darling Connie, please edit me—we will make beautiful music together” in a sexy Middle Eastern accent. Of course, the novel is set in the American South, so the accent doesn’t quite work. But hey, my daydreams are my daydreams. ;)

Book Review, The Gap of Time

The Gap of Time by Jeanette Winterson is a modern retelling of Shakespeare’s A Winter’s Tale, which explores themes of jealousy, love, betrayal, and forgiveness.

I eagerly began reading this novel because I thoroughly enjoyed a previous book in the Hogarth Shakespeare series (Vinegar Girl, a retelling of The Taming of the Shrew). However, it would have been wise if I’d considered whether I’d want to read a retelling of A Winter’s Tale.

Given that the play revolves around Leontes’s misguided belief that his wife is having an affair and pregnant with a child that isn’t his, I should have considered how that might be handled by a modern writer. And the truth is that the novel is much more sexually explicit than I am comfortable with, particularly in the first third. I would have set the book aside, except that I received the novel in exchange for a review and felt obligated to finish it.

Aside from the graphic nature of the novel, it was beautifully written. At times, even lyrical. Though there were some occasions when the novel felt disjointed (the play has the same nature), the pacing is quite good and propels the reader through the text.

I received this novel in exchange for an honest review.
Posted by Connie Keller at 8:31 AM 2 comments: