Having read Mr. Pavone’s other novels, I was eager to read The Travelers. After finishing the novel, I have to say it’s a thriller that lives up to the genre. The plot is complex and well-paced. The writing is very clean, which I really appreciate in a thriller—there’s nothing worse than awkward writing to slow the reading and take the reader out of the story.


That said, I did have a few caveats. At the beginning of the novel, the point of view changed frequently, as did the setting. While I was able to keep the characters straight, without knowing for certain who they were, I was disappointed that the setting changed so quickly I didn’t get to experience the locales. After all, one of the things a reader looks forward to in books with exotic locations is the chance to live in them vicariously—to smell the sea breeze in St-Jean-de-Luz and feel the heat of Capri. That said, by the end of the novel, I did get a wonderful sense of Iceland. But I would have loved to experience the same sensory texture at some of the other locales.

I did appreciate the way the relationship between the main character and his wife grew over the course of the story. While the ending may not be completely realistic, I did love how the couple overcame their struggles and were able to forgive one another. In modern novels, it is rare to find married couples who truly care for one another and are able to let love be the gateway for forgiveness. For that, and the enthralling thrill ride, I will give The Travelers four stars.

One final caveat. This novel does have many adult scenes. Many of which are crude. I understand their function in the novel, but I do want to warn readers that the scenes are a bit gratuitous.

I received this book from Blogging for Books for a review.
Posted by Connie Keller at 10:50 AM 1 comment:

Book Review: The Homemade Kitchen by Alana Chernila (4.5 stars, which means I'll round to 5.)

This cookbook attracted me because several years ago, by necessity of my son’s health, I had to become a from-scratch cook. I couldn’t pop a frozen meal in the oven any more. So began my food journey. And along the way, I fell in love not so much with cooking, but with food. I learned that cooking from scratch changes your palate, you can taste the fillers and the thickeners and the sweeteners in processed foods—and they don’t taste good. And I learned to taste the nuances of foods. In short, I became a foodie.

So Chernila’s cookbook with its emphasis on courageous cooking and making things from scratch intrigued me. And I’m delighted to say that I wasn’t disappointed.

One of the best things I made from this cookbook was feta cheese. Wow! It was easier than I thought, affordable, and delicious. Creamy and salty without a hint of bitterness.

The shakshuka recipe was great. I love shakshuka and this recipe had a perfect blend of fresh spices with the tomatoes and eggs. It’s my favorite go-to recipe when making lunch or dinner just for myself with a side of feta or goat cheese. (Sorry, there isn't a photo. Can't believe I didn't take one.)

And the whole family loved the Butter Lettuce with Dates and Ricotta. (Though I used goat cheese instead of ricotta—I’m not fond of ricotta’s texture.) 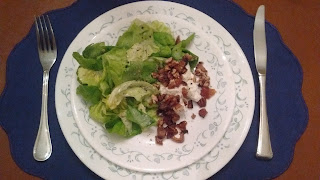 I also made the preserved lemons, which have uses in many Middle Eastern and North African dishes. 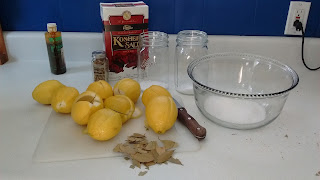 On the downside, no one would eat Ricotta Mousse. But if you’re a ricotta-lover, it might be perfect for you. And the Coq Au Vin with Buttermilk Spaetzel was a lot of work, and not worth the effort. If I were going to remake this dish, I’d make it with dumplings. And I’d allow a much longer, slower cooking time to give the flavors more time to blend and penetrate the meat. (The meal was better when we had the leftovers for lunch the second day.) 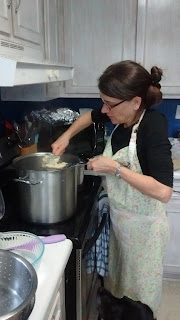 Here I am making the spaetzel. 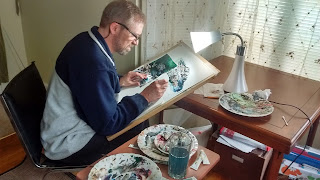 There are several
recipes I can’t wait to try. Radish butter. And Muhammara (a Turkish red pepper spread)—but my sumac supplier ran out. So I’ll have to order from Penzey’s.

And while I was doing a lot of cooking during our vacation, my husband was doing a watercolor. (And he helped with the cooking, especially the spaetzel--that dough was stiff.)

(I received this cookbook from Blogging for Books for a review.)