Saturday was “the” day. The dread day of the holiday season. The day we take out Christmas photo.

I got out the tripod and the camera and asked everyone to put on a shirt that had a collar. Everyone did. Ariel tried to color coordinator outfits, and the boys were patient-ish. Matt had on a pair of pants with a huge hole in the rear-end. But as he pointed out, no one we sent the picture to would ever know. Ariel and I pointed out that we could see more than we wanted to. So Matt duct-taped the rather large hole. Which was great until bedtime when he discover that it was stuck to his underwear. I think it’s time to throw those pants out.

Once again, the kids wanted our dog Jezebel in the photo. And once again, it didn’t work out. The gazillion photos with the dog ended up with her looking away on all the photos where we didn’t look weird/possessed/have our eyes closed.

After the camera battery recharged (it died mid photo session) and I checked the photos on my computer, I announced we had to do some photos without the dog. We tried an outside session. But it was windy. And my hair blew everywhere—hair in people’s eyes does not make for attractive photos taken by a camera on a timer.

So now, we have to vote on two photos. Most votes wins. And even though we have six people, there won’t be a tie. Luke will abstain saying he really doesn’t care.

If you’re curious, here are the two entries. (Okay, there are three. And that will really throw off the voting. sigh.) 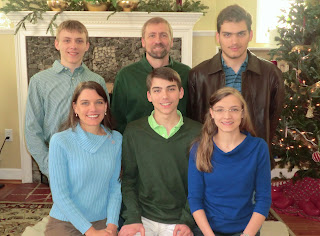 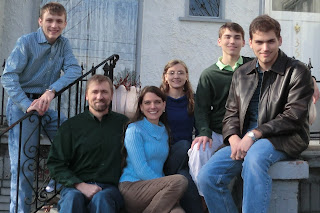 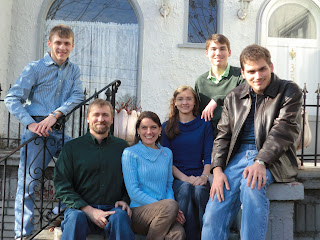 Posted by Connie Keller at 8:47 AM