In summer if the heat and humidity don’t kill you, the house projects will. On our project list, the cheapest and most simple job seemed to be the master bathroom. All we needed to do was repair the ceiling and walls (the wallboard hadn’t been properly installed) and paint.

We broke out the spackle (aka “mud”), scrapers, sandpaper, sanding blocks, etc. Cal and I are expert mudders, having done this numerous times before—our houses always need a lot of TLC. However, after mudding, sanding, mudding, sanding, and mudding and sanding some more, Cal said, “This isn’t going to work.” It turns out that if some incompetent person installs wallboard without matching seams and using seam tape, you can’t fix it unless you rip out the old stuff and put up new wallboard. We definitely didn’t want to do that. (We’ve done that before.)

The only thing we could do was hang wallpaper—thanks to our mudding efforts, the walls were now smooth enough that vinyl wall should cover the flaws that were left. We drove to Sherwin Williams. The tough part was finding something that matched our white sink and toilet, gold and silver fixtures, and our tub. The tub is the sticking point. It’s an oval shape that looks like it should be one of those cool jetted tubs, except it’s not. I suspect it was a “sale tub” not only because it disappoints you with its lack-of-jettedness, but because it’s the color of rotted asparagus. Imagine filling a bucket with the leftovers of olive green, gray, and dollops of blue and brown—now you have the color. No manufacturer in his right mind would make this color. It’s the result of a computer-engineered color additive malfunction—hence “sale tub.”

At any rate, we found two wallpapers in the entire phalanx of wallpaper books that approximated the tub color (yet another proof that our tub’s color was an error—manufacturers engineer paint, wallpaper, and appliances to match or nobody would buy them).

We ordered the less heinous of the two wallpapers, which is actually attractive. Mr. Williams, or at least his Chattanooga representative, told us we could pick it up in a week give or take a few days. It ended up being a few months. The paper was backordered—and somehow they didn’t know that for several weeks.

Have you ever noticed that when something doesn’t go well at the beginning of a project, it doesn’t bode well for the rest? We should have paid attention to the omen. Finally, the paper arrived, and we started hanging it. About fifteen minutes into the project Cal said, “Now I remember why we said we’d never wallpaper again.” “Yep,” I agreed. The problem? Our wallpaper stretched (despite “booking” the paper to prevent “pulling”)—it’s hard to match seams that don’t match up. Even with the liberal use of a seam roller, our seams refused to seal properly, necessitating the purchase of seam adhesive. Plus, once the paper was wet, it refused to cut and tore in ragged edges, which meant we couldn’t trim the hung wallpaper even with the razor-edged wallpaper trimmer until it dried. (I ended up using my sewing rotary scissors the next day.)

We did finish the project. The only casualty was a light fixture—the bolt holding it to the wall slipped out of the channel locks, which slammed into the glass lamp shade. We had to buy two beautiful coffee-toned faux alabaster shades that are much nicer than the old ones.

After installing the new shades, we crossed “master bathroom” off our to-do list. Yay! Now that leaves only two more projects. Staining the swing, the deck, stairs and gazebo are done. The problem is that I need two days without rain or drizzle. And the primed siding needs to be painted. After those jobs, we should be done. Although there’s the basement, the rest of Ariel’s windows (which have peeling paint and dry rot), the carport, not to mention the boys’ bathroom and the kitchen. Ah, well, there’s always next summer. 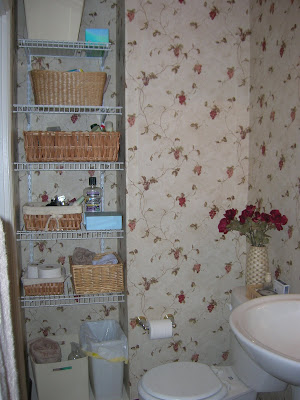 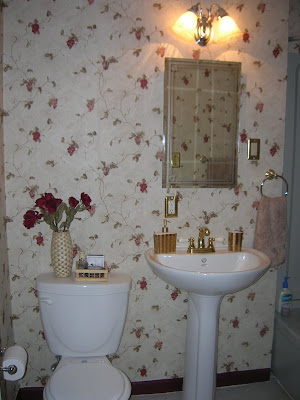 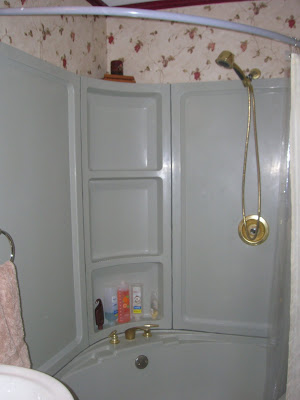 Note the ugly bathtub color--though these photos don't do justice to the repugnance of it.

Posted by Connie Keller at 9:10 AM