Luke and Ariel started classes Monday. They arrived 45 minutes early to allow themselves time to find a parking place. Yeah, right. The campus was a swarm of cars, kids, profs, and no empty parking spaces. Apparently, the university has two types of parking permits—reserved (i.e., very expensive, but you will have a parking spot though maybe not where you wanted) and general (which is an opportunity for the university to swindle unsuspecting freshman and their parents). I’ve never seen an empty general parking spot, of which there are very few. And, to my chagrin, the university sells as many general permits as there are people willing to buy. It has nothing to do with available spaces. One would think it was illegal to sell something that doesn’t actually exist, but the government’s been doing that for years.

What did Luke and Ariel do? They parked at a metered space, but the meter will only accept two hours worth of change—they had three hours worth of classes. Guess who drove down to plug the meter? Yep, good ole mom and dad (Mondays are his day off). When we got there, desperate students couldn’t even find metered spaces.

If that weren’t bad enough, the meter maids were out in full force ticketing all the poor kids who couldn’t get back to the meters and didn’t have parents who could plug them. It seems to me that the UTC parking services ought to be paying the fines, but they’re the ones giving out the tickets…

Of course, I’ve been reassured by several sources that the parking situation will radically improve in the next couple of weeks when kids stop attending classes and start dropping out. Hmmm. UTC is banking on irresponsibility and failure to solve their parking issues. Isn’t this a problem for anyone?

Public transportation is an option. But, I don’t relish getting my 17 year old daughter by herself on a bus at 9pm. Heck, I don’t want to be on a metro bus at 9pm. Eeeew!

In the meantime, I’m driving my precious freshmen back and forth to UTC. That definitely was not on my handout at Parents’ Orientation. In the meantime, I guess I’m supposed to hope that other people’s kids start failing quickly. That should give me some nights of sleepless angst. 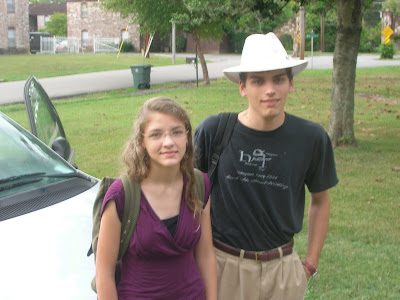 Here's a picture of Luke and Ariel before they discovered the parking fiasco.
Posted by Connie Keller at 6:43 PM