Soda Out Your Nose

Matthew turned 13 this week. Now I have four teenagers in the house! This is why we have to buy 6 gallons of milk at Sam’s Club. The cashiers used to say, “Uh, do you make cheese or yogurt?” And we’d say, “Nope. We have teenagers.” (Although since Matt can’t digest casein, he doesn’t contribute to the 6 gallons.)

But enough about milk, Matt had a party this Saturday with a few friends. I asked him what he’d like to do with his friends beside eat chocolate torte (Matt can’t digest gluten either—so his “cake” is ultimate mix of chocolate, butter, sugar, and eggs.) But he didn’t want me to plan anything—they were going to play board games.

Just so you know, we are a family that lives on games. We have everything from Carcasonne to Settlers of Catan to Louis XIV to Bang!. But I bought a new game this summer that has become a major hit among the teens we know. It’s called Quelf. I actually bought it for Cal for his birthday, and we’ve played it as a family. Cal and I thought it was “okay,” but neither Luke, Ariel, Jacob, or Matthew can go to any friend’s house without bringing Quelf.

The object of the game, theoretically, is to win, although no one seems to care who wins. The real object is to laugh so hard soda spews out your nose. The source of the laughter? The bizarre, inane and embarrassing things your friends have to do. For example, Ariel got a card that insisted she had to find and wear a hat with a chin strap for the entire game—the only thing she could find was my Jane Austen chapeau. (Of course, it would have been funnier if one of the boys had had to wear it.) Then there was Matt who had to put five ice cubes in his pants and roll the die over and over until he got a five. Or there was Andrew who wasn’t allowed to use his arms for the entire game. And what about Luke? Every time someone rolled a four, he had to stand over them and act like a weeping willow and hum sad music. (He chose Darth Vader music—not my idea of sad music, but I guess if you’re Luke Skywalker…) And worst of all, David had to sing a love sonnet to…Luke. I could go on, but you get the idea. Yep, this is why they love it—humiliate yourself and your friends in five minutes or less. And we think Japanese game shows are weird… 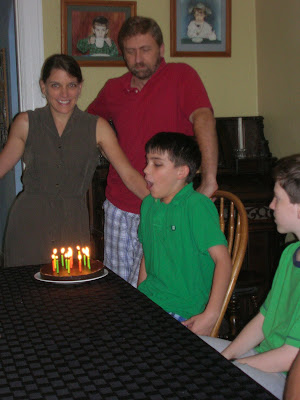 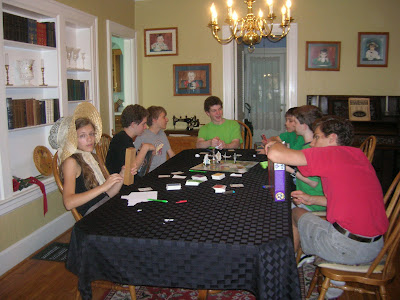