Ariel got another letter from West Point. Yes, that West Point. She also received a letter about six months ago inviting her and her parents to a dinner. This time it’s an Admissions Information Meeting. Maybe we should go, so they can see her. Now I have absolutely nothing against West Point—I think they’re great. The problem is that I can’t see my daughter (who probably weighs less than their packs, not counting the guns, uniforms, and boots) as a plebe.

After all, this is the girl who uses her free time to paint her fingernails in varying shades of sparkle-y. This is the daughter who can’t make conversation in the morning without an intravenous infusion of coffee. She’s the one who whines at the men in the house to “kill the gross spider in my bedroom.”

So why are they after her? Is she an expert marksman? Is she a superb leader of men—well, she can bark orders at her brother, but I don’t think that counts. I think I know why they’re interested. It’s the same reason she gets many letters from various (fill in the blank) Institutes of Technology. It’s about math and gender.

Ariel says, “They only want me because I’m a girl and I’m good at math—they want me as their token female.” She then waves the brochure from said institute under my nose and says, “Look at the cover of this one. There are two girls on it. You know why? Those are the only two girls in the whole university!”

“Yes, dear,” I say. “You’re right. It’s sexism or discrimination or something like that. Why don’t you make a nice pot of Earl Grey?”

Over tea, we eat chocolate and discuss Jane Austen. Then, she tries to explain to me “U-substitution and integration by parts” (which apparently undo the “chain rule”) in Calculus 2. I think she’s brought this on herself.


Please note: that is the Complete Illustrated Volume of the Works of Jane Austen! Try not to drool!! 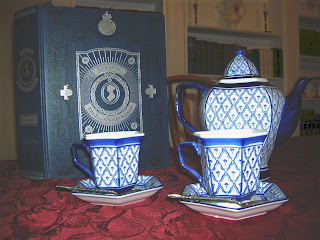