The Drain To Nowhere

The Noah situation is improving. Though it's taken a while to get there. First, the "city" came out. This consisted of a man showing up with a xeroxed drawing (not a schematic, but a hand drawn map) of the city storm drain system. This did not bode well.

Him: Uh, there's no water coming out of the man hole.

Me: No, that was yesterday during the storm.

He makes a move to get into his car and drive away.

Me: Um, there's still a problem.

Him: You have a drain in your basement? (He said this like one would say "You're from Mars?")

Me: Yeah. The storm drain water came up through our basement drain.

Him: It can't be from the storm drain.

He points to the ditch in front of our house, "That's the storm drain."

Me: A ditch is the storm drain?

I'm thinking--Then why did you need to bring that official city map? Clearly, you weren't concerned about being able to find it. But, I say, "So where did the water come from?"

This too did not bode well.

Me: Well, what other possible source of water is there?

Him: Uh, the sanitary sewer line.

Me: So, the water in my basement is from the sanitary sewer line?

Me: So, there's another source it could be from?

(I'm trying very hard not to be frustrated by the lack of basic logic skills.) Me: There are two possible sources of water: storm drain (ditch) or sanitary sewer line. So, if it 's not possible that it's the storm ditch it has to be the sewer, right?

Him: Well, if it's the sanitary sewer that would be illegal.

Me: Okay, but that must be the source, right?

Him: (note: he's mumbling and trying to think of ways to get away from the sewer-obsessed woman that reminds him of a Lab with a bone) Well, some older homes do have drains into the sanitary sewer line. But that would be illegal and you'd be liable.

Me: Great, just great. I'm thinking: The stupid city knows these things exist and doesn't want to deal with them so they made them illegal.

The city man decides to look at the basement.

Him: Yep, that's a lot of water. You should call a plumber.

At this point, I walked away. I know when I'm beat, and I left him to Calvin. Not too much later, he packed up his crumpled drawing, got into his hybrid car, and drove away.

Cal called the plumber who said, "Can't do much with all the water down there. You gotta get that water out first."

So, to cut to the chase, using two sump pumps, two siphoning hoses, and homemade drain plug, the water is now gone. Tonight, we're going to turn on the circuit for the heater, which was under water. Hopefully, it works. Otherwise, we might need to call homeowners insurance and explain about the flooding and the drain to nowhere. I really, really don't want to do that.

Here's a picture of the drain to nowhere. 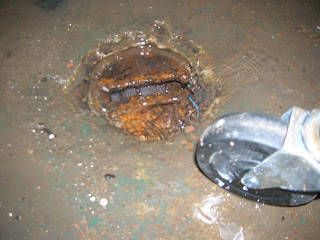 Posted by Connie Keller at 6:22 PM