Things That No Longer Loom

The things that loom over me have decreased dramatically.  The Christmas letter is done and has met with the approval of all concerned parties.  Matt complained (his word count wasn’t high enough), but my other minions defended me staunchly.  Extra candy canes for those kids.
The Christmas tree is completely decorated. Of course, tree acquisition was it trauma all its own.  Cal took Matthew and Jake out for a hunt at a “local” tree farm.  The local farm ended up being in The Boonies, GA, and the Mapquest directions were totally wrong—apparently it wasn’t over the hill and through the woods, but through the woods, over six hills, across one hollow, and past the neighbor’s still.  Cal ended up called the tree farm from his cellphone and spoke to someone whom he thinks was speaking English, but whose Southern accent was so strong that Cal said it could have been Tigrinya.  Once we get about ten miles past the Chattanooga city limits, we often run into a language barrier.
Eventually, they found the farm, which had boasted unusual farm animals and well as trees.  The animals were llamas that were so filthy and unkempt that Matt said they looked like hairy giraffes with mange.  He couldn’t bring himself to pet them. And the trees weren’t worth the drive.  Mostly Charlie Brown trees (remember a Charlie Brown Christmas and the sad drooping tree) with weird bare spots.  Next they went to Ace Hardware—we had a coupon.  Ace had a handful of nearly needleless trees and wanted $45. Um, I think not. Then they hit a lot whose proceeds went to a local Children’s Hospital. Sadly, they had only C. Brown trees too.  I guess everyone down here does their trees the day after Thanksgiving.  Finally, they bought a WalMart tree.  Sad, but true.
It’s currently dropping needles all over the living room floor, but it looks beautiful.  The kids did a lovely job of decorating it. I sat on the couch with Cal, drinking cider and reading the first chapter of Skipping Christmas aloud to the family.  If you haven’t read it, you should.  It’s the perfect antidote to the Scrooge living inside us all.
Oh, and guess what? I only had to vacuum once.  The kids not only decorated; they swept and vacuumed too. Holiday bliss. 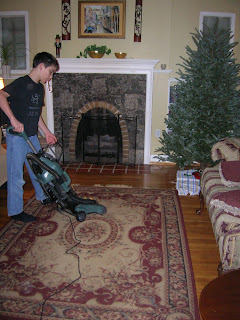 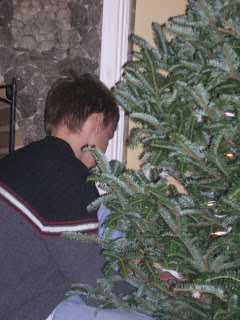 Here's our electrical engineer making sure the lights will working properly. 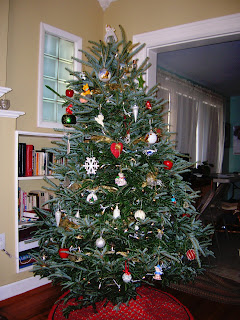 And the finished product.  Okay, it looks much better in person.  But you get the idea.
Posted by Connie Keller at 9:47 AM

Email ThisBlogThis!Share to TwitterShare to FacebookShare to Pinterest
Labels: Christmas