Before we went on vacation, Cal warned me not to overdo vacation preparations lest I get sick on board. Despite all the “wrenches” thrown into preparations, I stayed healthy on the entire cruise. However, not everyone could make the same claim. Somewhere early in the cruise, a vacationer brought back a nasty, highly contagious gastrointestinal bug from one of the islands. Medical chaos broke loose.

My first clue was one morning I walked into the hall and smelled bleach. Stewards were wiping railings, handholds, door handles, every non-fabric surface with bleach. Hmm. As much as the cruise lines prize cleanliness, I’ve never seen them out with bleach. Later that day a steward bawled out Luke and Ariel for taking a fork instead of waiting to be given a fork (which is what they did the day before). Odd.

Next I smelled unpleasant odors and saw floor fans. After that the ship personnel became very aggressive with hand sanitizing—the stewards had to see you sanitize your hands before you were allowed into the dining room.

Cal started running a fever, stopped eating, and had to be forced to suck ice chips. Then came the announcement. All sick or possibly sick people had to notify the medical officers and be quarantined. Cal was among them.

Speaking the obscure, but native language, of the officers came in handy. Our ship was under “Code Red.” We had very, very high numbers of sick people. Certain dining areas were shut down. Certain activities like chess, library lending, etc., were ended. A DVD we rented was free because the rental woman didn’t want to touch my “card” because we came from a stateroom with a sick person. Even the on-board jewelry store was shut down—touching jewelry could spread disease.

When we arrive in Fort Lauderdale, the entire ship has to undergo a complete sterilization before the next cruise. Cal’s doing better—he’s up and about, though he doesn’t have his appetite back. But I’m hoping and praying that the drive from Fort Lauderdale to Chattanooga is “uneventful” because 12+ hours is a long time if you have to find bathrooms along the way. And it’s even longer if you can’t.

(The rumor circulating is that the sickness is so bad it might make the news.)
Here's a picture of me with a canon at a Napoleonoic era fort. Maybe Horatio Hornblower came here. 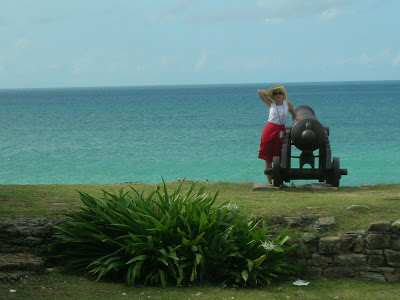 Here's photo of Luke--his skin is so tan from the ten days that he looks like a native Carib. 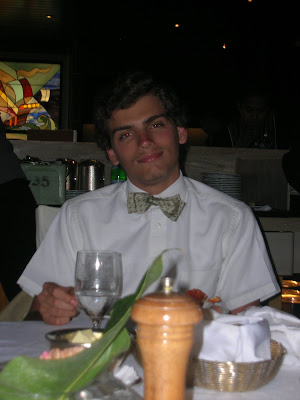