The other day we were sitting in the dining room next to a huge window, and Matthew asked me, "What is the name of the bugs that swim in the water next to the ship?" I frowned--bugs that swim next to the ship? “I’ve seen them out the windows,” Matt said. Jake interrupted, “They’re not bugs. But they swim just as fast as the ship.”

Ah, I thought, they are confused. I launched into my “there are no bugs, what you see are reflections of the sunlight dancing across the water” speech. “Besides,” I said, “nothing small could keep up with the speed of the ship—we’re booking.” The boys gave me their “you poor confused parent” look. After the meal, they boys took me through a circuitous “secret” route to the very bow of the ship. We looked over the prow. A couple of minutes later I saw the "bugs." Exquisite flying fish—translucent and glimmering in the sunlight. If I hadn’t seen them, I wouldn’t have believed the boys’ descriptions. They leapt out of the water and their pectoral fins flapped with the grace of wings. And they did keep up with the speed of the ship! When they needed a breath, they dove into the sea.

Later on I discovered that they’re able to “fly” so fast because they’re riding a wind created by the ship. Very Cool! 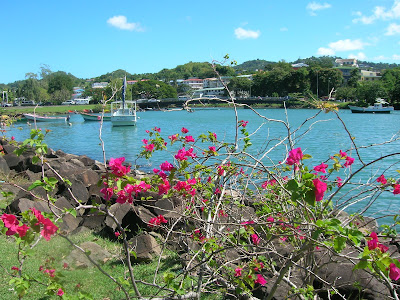 This is a picture of Antigua (I think). Don't you think this would make a wonderful watercolor painting? (Not so subtle hint to Calvin.)
Posted by Connie Keller at 8:04 AM