The drive from Fort Lauderdale to Chattanooga is supposed to take about 12 hours. Maybe 13 depending on the numbers of bathroom breaks and how long it takes you to wolf down greasy fast food.

I was thinking we’d get home before midnight. Ha. What I didn’t know is that the state of Florida must have use-it-before-the-end-of-the-year Federal Cash for Clunky Highways funds. I mean why else would the state decide to do road repair the week of Christmas? It doesn’t take a lot of brains to realize that there just might be a lot of traffic the week of Christmas and that shutting the highway down to one lane isn’t a wise idea. Nor are the ridiculous lines at the toll booths on the Florida Turnpike. Speaking of which, it seems to me that toll roads are only a semi-legitimate form of demanding baksheesh (bribery). I was complaining about it loudly in the van, and Ariel informed me that roads don’t qualify as a “public good” and thus from an economics point of view, they can charge whatever they want. Yeah, right. Free roads seem like a public good to me.

At any rate, our getting home on time schedule was thrown wildly off kilter. I ended up driving late at night. I’m not at my best late at night, but Cal needed a nap. In order to stay awake, I cooled the car down until I got a bit shivery—it’s hard to fall asleep when you have goosebumps. But that wasn’t enough. I turned on the radio. We were in Nowhereville, Georgia (just north of Valdosta), and the only station I could get was country-western. Not my favorite, but noise is noise. I listened to one song where the guitar was so loud you couldn’t understand the words, which was probably just as well. The next song came on. A twangy voice started talking about plowing the fields and the girl he loved. That’s okay. I like ballads. Then came the refrain. “She thinks my tractor’s sexy and she loves my farmer’s tan.” I burst out laughing. It woke me up for a good long time. I realized someone should start a music station to play wacky country music to keep tired drivers awake. I bet you could make a chunk of change. Or maybe you could get a government grant: Cash for Country. Seriously.


Here we are swimming on St. Thomas. 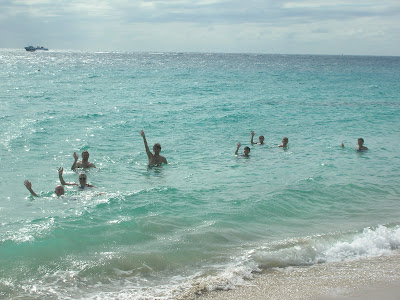 Ariel at the gate of a cathedral on Antigua. 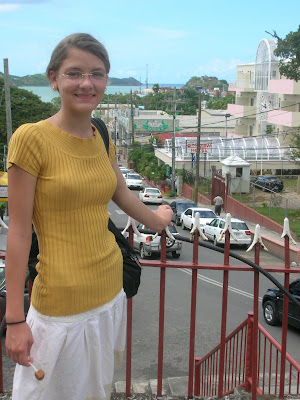 Posted by Connie Keller at 8:12 AM