Why can’t I buy things that are made to last? I realize planned obsolescence is a given ideal in our society, but can’t manufacturers at least pretend to make a product that functions beyond the warranty, which never seems to apply to whatever goes wrong with your appliance?

They ought to be able to. Manufacturers have in the past. For example, I have my grandmother’s sewing machine. It was built in the 1920s and still works great. But the vacuum cleaner that I bought 2 ½ years ago and to be replaced three weeks ago—and that’s after I replaced the rotator brush, which was not under warranty, a year ago. And I actually maintain my equipment. I oil the bearings, change the belts/filters and clean the brushes and the tubes. Why do I bother to do this? It clearly doesn’t prolong the life of the junk that large corporations foist on unsuspecting consumers like me. I suppose one could argue that a family of six probably uses a vacuum more times a week than is planned for by the manufacturers. That may be true.

But what about our microwave, which had to be replaced today? We’re not big “microwave people.” I cook on the stove or in the oven. I never, ever buy microwavable meals. I even heat water for my tea on the stove. Despite this, my underused microwave caught fire. No, a teenage Keller did not put a metal object in the microwave. Instead the internal circuitry caught fire and burned itself into a charred mess that necessitated open doors and fans. Since we have had this microwave for only 2 ½ years (our previous microwave lasted 17 years), one might argue that we bought a lemon. Except that friends of ours have the same microwave, and it makes the same unusual noises that ours did before it expired. (Imagine electrical sounds of torture and mutilation combined with the suspicious sounds of internal arcing and the bass rumble of bassoon). Of course, theirs has not committed suicide by self-immolation. At least, not yet.

But I don’t think these disposable appliances are meant to serve the consumer, at least not for any length of time. What’s really going on is that rotten appliances are undercover corporate manufacturing’s answer to the “stimulus package.” (Clearly the current federal stimulus package is only another governmental cart-and-pony show where “elected” officials “donate” money stolen from the citizens to give to their lobbyist buddies.) What we should learn from this is that if companies who make crummy products can’t balance their books, maybe they should go under. And then, just maybe I could buy a product that would really last, maybe something like my grandmother’s sewing machine, which is almost 100 years old and still can stitch a beautiful seam. 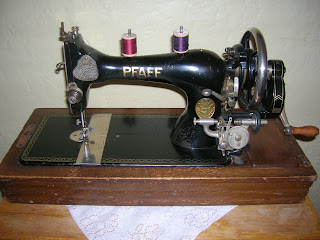