Once a month, we have an open house for college students (anywhere from 10 to 40 students attend). After a time of prayer and food, the games begin. Sometimes we play a game with paper and pens that leads to peals of laughter—I know that’s a bit hard to imagine, but it’s a P2C2E (a process too complicated to explain).

The other game we play is Mafia. Basically, it involves secrecy and killing people. After each death, the people who are still alive (no doubt Sicilian peasants) decide/guess who the guilty party is and kill them. The game has a “narrator” who explains the details of each murder, which are generally more gruesome than your average murder mystery. The chemistry majors always come up with new explosions. The lit people describe in detail how brakes are tampered with and cars drive off the edge of Lookout Mountain. My favorite death last night was “how Dan was disemboweled and strangled with his own intestines.” A long conversation ensued between the biology people about whether someone would survive a disembowelment long enough to be strangled.

I became the subject of a discussion last night when three people were left alive. I tried to convince Stellie that Duncan was the Mafioso, not me. Stellie said, “But, Mrs. Keller, the last time you were the mafia, you killed off your husband and all your children and you looked innocent then too.” She killed me.

I always love it when one of the college students (frequently Karin) gets a call from her parents.

Eventually, Karin will graduate, and we will meet her parents. How awkward that might be…
Me to Karin’s mom: Hello, it’s so nice to meet you.
Karin’s mom: So, you’re the people who play Mafia.
Me: Uh, yeah.
KM: So, you encourage our children to dream up all manner of murder.
Me: Sort of. But we pray first.
KM (nods)
Me: Karin really likes my salsa. Would you like the recipe?

Here are a couple of pictures. 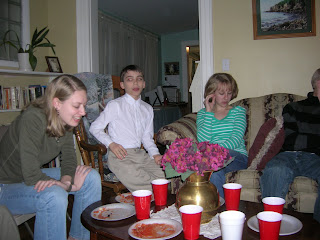 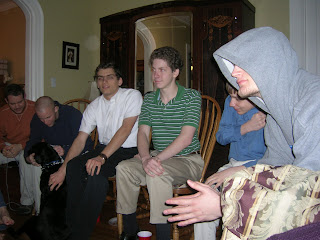