Shadows of the Hidden

I wanted to let you know about Shadows of the Hidden. It's new a new book written by Anne Riley and published by Compass Press. (They're the publishers who put out Winter Wonders, the anthology that included my short story, "Screwing Up Mongolia.")

Here's the cover and the blurb. 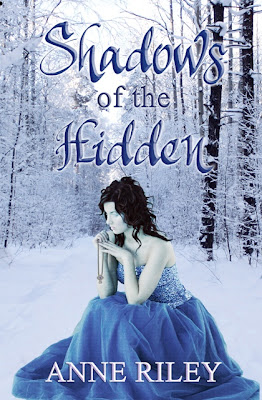 Natalie Watson doesn't believe her parents are dead, even though they disappeared five years ago. Discovering the truth about their fate is one of the only things that gets her out of bed in the morning. But after moving from her home in Georgia to her aunt's boarding school in Maine, solving the mystery of her parents' whereabouts is just one of several challenges she must face. When she's not fending off attacks from the popular kids, she puzzles over the rumors about a strange boy in her math class--one with fiery red hair who rarely speaks. Despite suspicions that he murdered his sister a year earlier, Natalie finds it impossible to stay away from Liam Abernathy--especially when he confesses to knowing something about her parents. Soon she's following him into the forest, where things happen she doesn't understand...things that shouldn't be possible. Natalie soon realizes her connection to Liam is deeper than she ever imagined, and not everyone she counts as a friend can be trusted. When she finds herself at the center of a centuries-old quest for immortality, she must work with Liam to stay alive--even if it means facing a truth about herself and her family that will not only shake her perception of herself, but of the entire world around her.

Shadows of the Hidden is available in paperback or as an e-book for Kindle or Nook.

Anne Riley is an author of young adult fiction from Birmingham, Alabama. Her first novel, Shadows of the Hidden (previously self-published as The Clearing), was published by Compass Press in December 2012.


Anne is a high school Spanish teacher by day, a writer by afternoon, and a mom and wife all the time. Her writing career began in August 2008 when she began working on her first novel, The Clearing. By December, she had a completed manuscript, and by January 2009 she had signed with literary agent Alanna Ramirez of Trident Media Group.
When Alanna left Trident in September 2011, Anne began the search for a new agent, ultimately landing with Emma Patterson of Brandt & Hochman Literary Agents.
Visit her at her blog: Anne Riley Books