A strange thing happened on Wednesday and Thursday. My YA novel shot through the ranks at Amazon. I found out what it’s like to ride the crest of the wave.

But it’s very hard to get the word out when you don’t have a megaphone. Still, my efforts paid off and I broke small sales barriers. And I was/still am very thankful. Then, I found E-Reader News Today. And they were willing to advertise my novel (given it had enough good reviews and I was willing to sell it at a bargain rate—99 cents) for a part of the royalties. I figured it would be a win-win situation. If the book did well, I’d get a lot of exposure. If not, I wouldn’t have lost a big investment. So I submitted my book.

I hoped and prayed for the best, but kept my expectations very low. The site warned me that YA books aren’t the biggest sellers in the e-book biz. (I already knew that.)

Wednesday came around. I had a couple of sales. Good. By afternoon, I had a few more sales. By evening, I was pretty excited. The sales were really coming in. And by Thursday morning, Screwing Up Time was ranked #6 in Amazon Kindle’s Teen Literature and Fiction. It was only two spots below The Hobbit!

It was the most amazing feeling. People were interested in my book. I had my techo-son do a screen capture so I could savor the moment later because I knew it wouldn’t last. And it hasn’t—this morning my book has slipped to #15, which is still amazing. And the sales are still very good. Who knows what will happen today—Fridays are much better sale than Thursdays. But even if I slide down the charts, that’s okay. For a moment, my book was on the top of the charts. 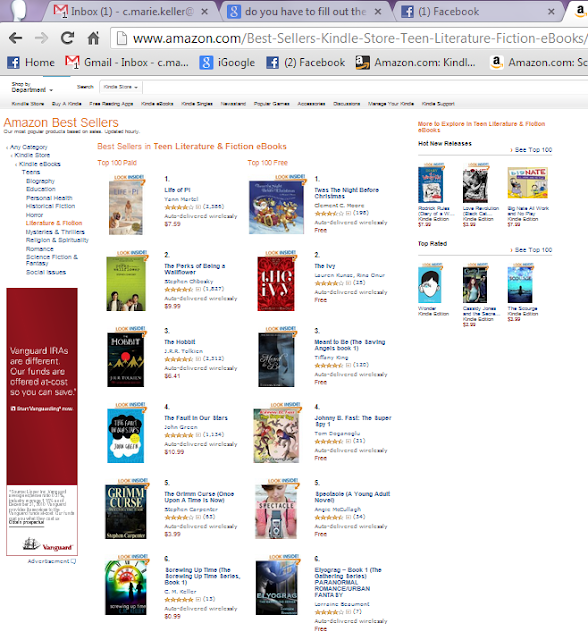 Posted by Connie Keller at 8:04 AM