I’ve been blogging since May 2008, and I’ve decided to take you on a tour of our house on and off over the next few weeks. (Okay, that means that after four plus years, I might be running low on blog topics—but bear with me, I’ll try to make this fun.) 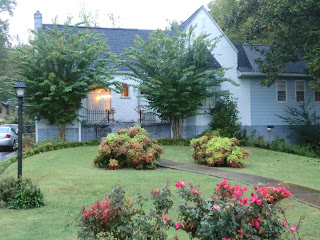 We have/had a hedge of roses, which now have rose rosette disease and have to taken out and destroyed. 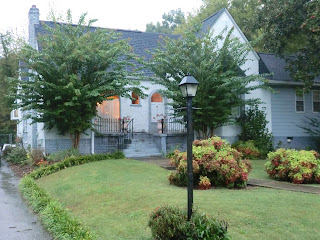 Yeah the trees need to be trimmed, but I've been busy with the new book.

First off, this is what our house looks like. It was built in 1940. At least, that’s what the paperwork says. A friend who’s a contractor laughed when we told him the age. Apparently, the city didn’t keep records back then—so they made up the build dates for houses. Ours has been rounded, generously. It was built way before 1940, which would explain some vintage art deco touches, crystal door knobs, and honeycomb tile.

Given that we aren’t restorers and old (vintage) homes are known to be money pits, why did we buy an old house? Aside from aesthetics—old houses are beautiful—at least until something rots, explodes, or dies, we bought it for the square footage. We have a menagerie of a black Lab, a bird, hamster, and four kids.

We have four kids very close together in age—the oldest was five when the youngest was born. It’s kind of like having spread-out quadruplets.  They are all in each other’s business, each other’s rooms, and “share” their rabid opinions on everything. It’s managed chaos—it also meant I spend my entire child-bearing years in sweats and a ponytail, hoping I’d find time for a shower by the end of the day.

BTW, watch your step as you climb the porch steps—because the house is so old, there weren’t a lot of zoning/building regulations, so the porch is concrete and brick on top of wooden supports. (Can you say dry/wet rot?) Though apparently the porch has been shored up.

Welcome to the living room. Yes, we have a very cool fireplace that functions. However, the flue doesn’t close anymore, and occasionally a bird will fly into the living room. Not to mention the heavy rain that splashes down the chimney and leaves soot stains on the brick work. But it’s really pretty. 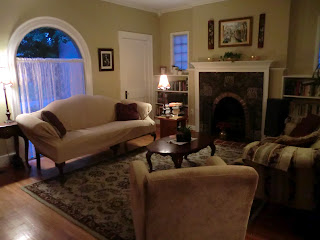 When I have grandkids, I’ll tell them how their parents did homework in front of the fire. Of course, my kids will ruin it by explaining that the reason they did their work in front of the fire wasn’t the romance of it all, but the fact that I keep the heat set too low. I tell my kids to put on a sweater—65 is all the heat I’m willing to pay for. Of course, the limited insulation does make it a chilly 65…

But, hey, check out that gorgeous crown molding—yeah, those are divots in the wallboard. When we first moved in, there was a cockroach infestation, and the boys shot cockroaches with their airsoft guns. Only the shells were too hard and the pellets wouldn’t crack the chitin. The boys learned to ricochet the shots so the pellets would hit the roach underbellies. The roaches would split and fall to the floor. And then I noticed the pock marks in the walls.

Oops, sorry about the roach guts. Instead, notice the cool front door with semi-circle top and the beveled glass—which is beginning to show its age as the panels separate. And, of course, they don’t make doors like that anymore. So I’m going to put some long screws into it to hold it together until I’m willing to auction a kidney on eBay to afford a replacement. 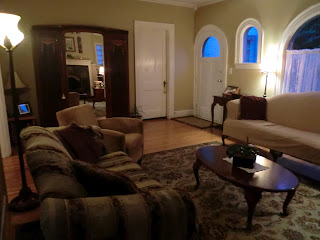 But, really, we love it. I love knowing the house has settled (some friends had their new house settle—but it didn’t settle in the same way as the front porch, which has now separated from the house). I love the plaster walls, the built in bookcases, the wood floors, the memories, and even the cockroach pocks.

BTW, tomorrow (Tuesday) I'll be posting the blurb for my new novel Screwing Up Babylon on my book blog. Be sure to check it out.
Posted by Connie Keller at 8:17 AM