What My Dog Thinks

An old quote goes something like this, “I hope to be half the man that my dog thinks I am.” If you’ve never had a dog, perhaps this post will explain what that means.

Every morning I get up around seven—our alarm goes off and we hear opera. Opera isn’t my choice, nor is it Cal’s. It’s just that the radio station now plays opera at 7am. I think it’s because you can’t sleep through opera. A warbling contralto voice forces you to get your derriere out of bed and turn off the alarm. I stumble out of the bedroom and put on the kettle. Then I get Jezebel from the boys’ room where she sleeps. I give her two cups of dog food. But Jez won’t eat. She looks at the food longingly and I tell her, Eat.” But she can’t, not until she sees The Master.

Jez looks at me with baleful eyes and begs me to let her into our room where The Master is getting dressed. I open the door to Ariel’s room (yes, I know that sounds odd). We have a 1940s cottage and the rooms ramble a bit. The easiest way to get to the master bedroom is to go through Ariel’s bedroom. Anyway, Jez can open the door to our room once she’s in Ar’s room so I let her in. Ariel doesn’t budge, she’s learned to sleep through the sun, the stereo, and dog slobber.

Jez and Cal come into the dining room. Once he’s patted her head the requisite number of times and he’s putting his shoes on, she wolfs down her food. After that, she can’t leave Cal’s side because what if The Master went running without her? It’s never happened, but it could. And if it did, that would be bad because The Master needs her. A cat might walk near Master and she could bark and try to kill it for Master. It does throw the Master off his balance when she jerks at the leash to massacre the cat. But that has be risk has to be accepted because of the danger of cats, who want to be worshiped like they were in Egypt. Speaking of worship, Master might meet various cultists. Jez comes unglued at the very sight of magazine-lugging cults—they won’t even talk to us at the house anymore. They just hand us the literature and run.

But it’s not just the cultists. What if Master is running and comes across a gang of AK-47 totting drug-dealers? And, um...she and Master could die together. Of course, they’ve only ever come across school children waiting for the bus. But it could happen. That’s why Master needs her—because she’s tough and she loves him.

Here's a picture of Jez and Cal coming back from their run. It's actually posed--they were running too fast for the first picture and it blurred. 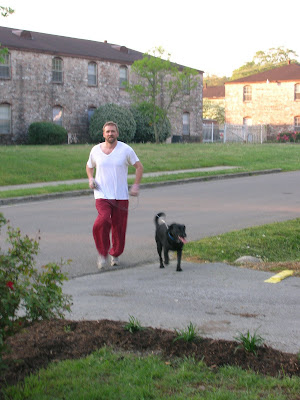 Posted by Connie Keller at 7:38 AM