We had a great time at the Frist Center. The paintings, especially the Pre-Raphaelites were exquisite. And they had a fabulous Dutch “vanity” painting. After the Reformation came to the Netherlands, much of the painting of the time period changed. Instead of the Madonna and child, you get emotional paintings of every day people and things. And you get the vanity paintings, which are among my favorites besides Vermeer. In these paintings the painter would paint much of the beauty of things—food, possessions, especially the trinkets of the wealthy. And then amongst these trinkets the painter would include something very different. Sometimes it was as simple as a broken glass or times a skull. The viewer was supposed to remember the brevity of life and not be caught up with accumulating possessions. At any rate, Ariel found it first—a skull tucked in the far left corner. And there was a beautiful orb that contained a reflection of the painter. Fun, fun. The only downside to the exhibit is that the collector that amassed this huge

collection had a predilection for nudes. They were everywhere—Jacob said, “Why are there so many paintings of naked people?” Though, Jake’s been to lots and lots of museums so the nude isn’t a great surprise. The other bummer is that they wouldn’t allow us to take any photographs. (No, I wasn't planning on taking pictures of the nudes. Only the Pre-Raphaelites.) I was really bummed. A lot of museums allow photography as long as you don’t use a flash. But they didn’t. However, I did get a shot of the building that housed the museum. It’s an old central post office that was build in the Art Deco style and it was fantastic—like being in a Jeeves and Wooster set in New York City.

The Frist also had an ancient Greek exhibit. They had scads and scads of urns. *Yawn* And they had a cool Corinthian helmet—looked very Spartan. Again no pictures though. One other cool thing. They had a Greek gods personality test. I turned out as Athena. Oh yeah, the goddess of wisdom! Cal was Odysseus (more hero than god). Someone else in the family came out as Polyphemus (cyclops). Guess who?

Of course, that exhibit was great preparation for our visit to the Parthenon. Nashville has a full scale replica of the Parthenon. The attention to detail is astounding. They made actual casts of the figures on the Parthenon. (Done before the Turks stored munitions in it and blew it up by accident.) They did research—using detailed drawings from the 1600s. I thought the replica would be lame, but it was awesome. And for those of you who saw the Percy Jackson movie, yep that’s the Nashville Parthenon—though they used a sound stage for the inside shots.

Hope you enjoy the pictures.


Here's the Art Deco post office that houses the Frist. 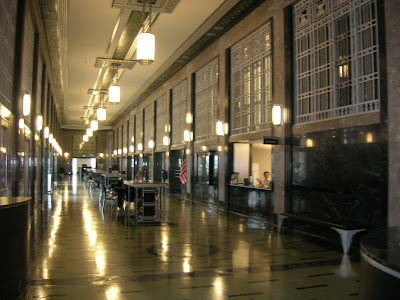 Here's a photo of the pediment of the Parthenon. 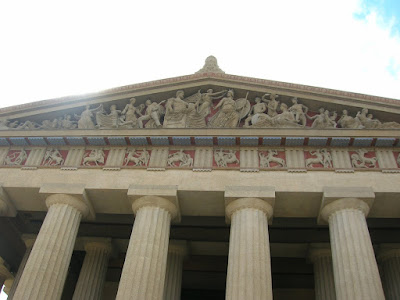 Here's a photo of the six of us by one of the columns. 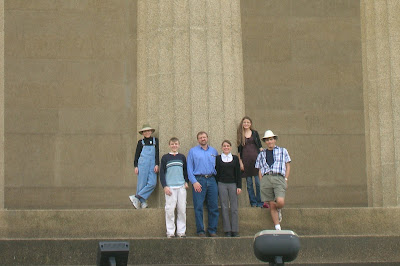 Here's the statue of Athena. It's covered in 23.75 carat gold leaf. In her hand is Nike. Her face is heavily made up. I thought, "The painter went crazy." But, apparently the ancient Greeks thought so of their Athena statue too. Historical evidence says that the ancients complained that she looked too much like a "lady of the evening." 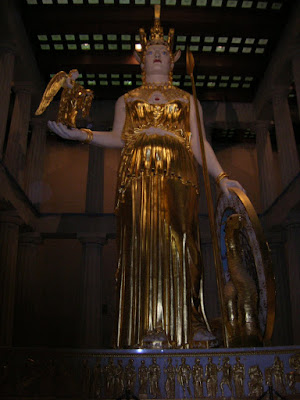 Posted by Connie Keller at 6:00 AM