Instead of trekking somewhere for spring break, we're staying home and visiting local attractions. Today we became spelunkers and went to Ruby Falls. For those of you who don’t live here, Ruby Falls is a waterfall in an underground cavern.

Okay, we weren’t really “spelunking” because we followed a tour guide and the path was lit with electrical lights. But we did go down 1000 feet into the limestone mountain, and we could pretend we were the original cavers, who crawled through the very narrow openings, which have since been enlarged and paved. We saw amazing stalactites and stalagmites. Not to mention columns—tites and mites that reach and coalesce. And then we arrived at the grotto and saw the falls. It was beautiful. We took a walk behind the falls and got to look up into the backside of the falls. The water looked the diamonds shimmering in the light.

Our tour guide gave us a fascinating lecture on why we did not want to drink the grotto pool water—it’s loaded with magnesium. Not that the magnesium would hurt you. Only it has about four times the concentration of the magnesium as in Milk of Magnesia. Our tour guide assured us that there’d be no way a person who drank the water would be able to get back to the elevator “in time.” (There are no bathrooms down there.) On that happy note, we kept all of our mouths closed when we went under the falls.

I’ve included a few pictures of the trip. I hope you enjoy them. Next stop, Nashville. No, not the Country Music Hall of Fame. We’re going to Frist Center for Visual Arts, which has an exhibition of Pre-Raphaelites. Then we’re off to see the Parthenon—but not the one in Greece. More on that later.
Here are Matthew (ears plugged because the sound of the water is thunderous bouncing off the walls of the cavern), Ariel, Calvin, and a bunch of strangers going back behind the waterfall. 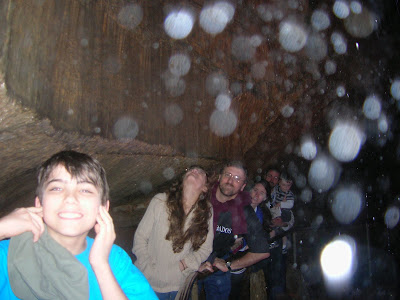 Here's Cal. Note the height of the ceiling and the fissures in the rock. Ariel's the only one who whopped her head against the ceiling. 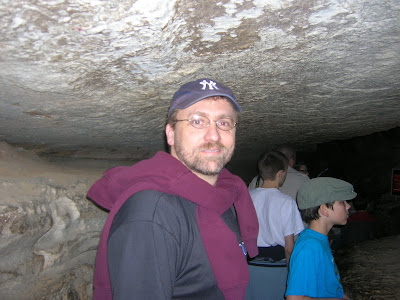 Here's Jacob with two stalagtites named "candle" and "cactus"--the only two you're allowed to touch. The rest are protected by federal law. 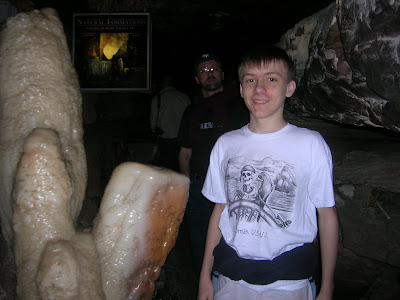 Posted by Connie Keller at 6:00 AM

Email ThisBlogThis!Share to TwitterShare to FacebookShare to Pinterest
Labels: vacation