I spent the morning at the Tennessee High School Foil Championship. (They even had a team from as far away as Memphis.) Luke and several other members of the Knights of Tiftonia participated in the event.

If you’ve never been to a fencing match, it’s a very cool thing. The fencers must salute each other at the beginning of each match and after every point (the person who lost the point must salute first). This was an electric match (non-electric foil is called “dry”) so the participants are “wired.” Their swords have a current running through them and when the sword tip makes contact with another fencer’s lamé (a silvery metal overshirt), then the lights and buzzers start.

The matches can be quiet or loud. (Once one of our fencers fenced someone who made quacking noises—but that is the exception rather than the rule).

Anyway, here’s a summary of one of the play-by-plays:

“Thrust, parry, riposte, counterattack, more attacks.” (Green light and white light blink on and buzzer sounds). No point. Why? A point doesn’t count if the other fencer has right-of-way and also made contact, even if it was “off target.” Foil fencing (as opposed to saber fencing) is very gentlemanly. Of course, historically I don’t think they cared who had right-of-way as long as you wounded/maimed/killed your adversary.

“Thrust, parry riposte, counterattack, parry, riposte, etc., etc.” (Red light goes off). Point scored. This time the red player made contact and had right-of-way. Yeah for the red light fencer!
Here's a picture of Luke looking quite dashing in his fencing gear. 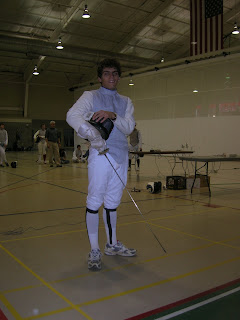 Here Luke is on the left. (He's wearing the striped socks--it's hard to tell them apart once their masks are on.) Notice Luke's sword is in his opponent's guts. Point for Luke!! 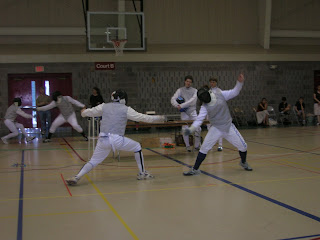 Posted by Connie Keller at 2:21 PM