The boys came home the other day to discover that Jezebel had silver toenails. All three boys pitched a fit. They knew what had happened. Ariel had struck. She’s been talking about Jez, saying that she’s the ultimate Goth dog. She’s solid black with a spiked collar and a nasty growl. To complete the picture all she needed was silver nails and piercings. Of course, Ariel knows better than to pierce anything. Jez gets vey worried about pain; Cal even has to comfort her when it's time for a nail clipping.

We are currently (providentially?) out of nail polish remover so the boys are scrapping silver paint off the dog’s nails. But, it’s kind of ironic really. Jezebel puts on a great show with her vicious guttural growl, the hair that stands on end, and the big spiky teeth. It's even better when you see her watching birds through the window with her nostrils flared and her muscles quivering. You can almost hear her saying, “If it weren’t for the glass…”

But aside from birds (you can’t get beyond breeding), she’s an old softie. She loves just about any creature, especially hamsters. Clara and Sam spend the night in their cages on the dining room floor because they are too noisy. First thing in the morning after Jez eats, she checks on the hamsters. And the hamsters, who are obviously stupid animals, climb the bars of their cage to say “Hi” to Jez. They stick their noses out, and Jez rubs noses with them. Yep, that’s right—they give each other Eskimo kisses.

After that, Jez checks the floor. The hamsters throw the food they don’t like out of their cages and Jez eats it. She loves hamster food. It could be that they just have a deal going. A Lab-hamster shakedown along the lines of “Throw out your food, or I’ll eat you.” Could be. But Eskimo kisses are hard to fake.
Here’s a picture of Jez with Clara. I tried to get a photo of them rubbing noses, but I’m a slow cameraman. You’ll have to take my word for it. 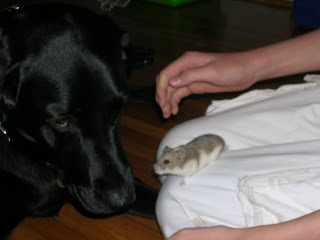 And here's picture of Jez waiting for a snack of hamster chow. Be sure to check out the silver toenails. 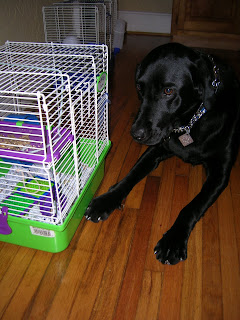 Posted by Connie Keller at 1:05 PM