A few weeks ago, the children decided that Jezebel needed a “baby.” Cal and I had had the dog spayed when she was six months, and the kids felt that she needed an opportunity to express her female hormones since we so cruelly had her “taken care of.”

Amongst themselves, they decided to give Jez a stuffed animal. After all, Jill (our previous dog) had been extremely maternal towards her stuffed animals. She “nest” up her bedding, lay her “baby” in the middle, and cuddle up around it. Obviously, Jezebel needed this emotional support too.

The next step was to procure said “baby.” It was decided to give her a jointed stuffed bear. Apparently, the “jointed-ness” made it more life-like (though one would think that the bear’s overalls detracted from that, but no matter). The other important factor in the selection was that owner of the bear was willing to part with it.

One night, the children put the bear in the kennel where Jez sleeps. The next morning, Jez got up and carried her “baby” in her mouth. There was much ooohing and ahhhing—Jez was mothering her baby bear.

Later in the week, the kids were disappointed to discover that Jez occasionally chewed on her baby. But since there was no damage done, they put it down to Jez’s immaturity—“she’s still a puppy.”

Yesterday, Jez was walking around with her baby’s head in her mouth. And as Jez has been doing for a while, she shook her head so the “baby’s” body jerked back and forth. Ariel asked, “Mom, why does she do that?”

I said, “Because she’s trying to break its neck.”

I said, “She’s treating it like a small animal that she’s caught and plans to eat.”
Children’s faces looked at me like I’d turned their precious animal into a Moloch fiend.
“Hey, don’t blame me!” But they did. Why do they always “shoot the messenger”?

Here's a picture of Jez chewing her "baby." 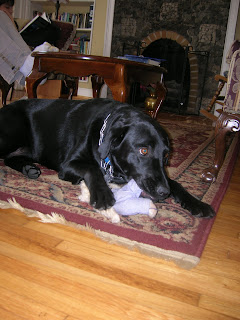