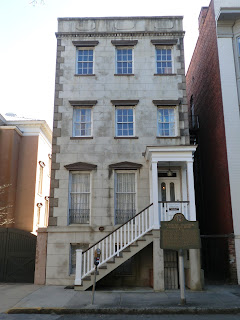 After I came home from caring for my daughter, my husband decided I needed a short vacation, so he took me to Savannah. I’d always wanted to go to Savannah. And then, I discovered Flannery O’Connor’s childhood home is in Savannah. And they give tours! (If you decide to visit, the times and days are very limited, so check before you go.)

We had a wonderful docent, who even knew Ms. O’Connor’s mother, Regina! So she knew all about the family, though she never met Flannery because she passed away before the docent was born. 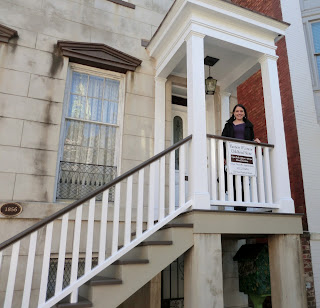 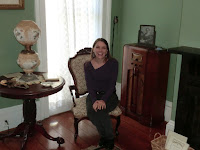 The living room where young Flannery and her friends would gather to listen to radio shows on Saturday morning. The stories were scary Grimm-type fairy tales. (The radio is behind me, to the right.) 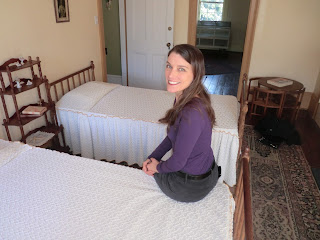 Here is Flannery’s bedroom. Apparently, she used to push her bed against the open window in the summer. Her mother wasn’t thrilled. It’s on the second story of the house. 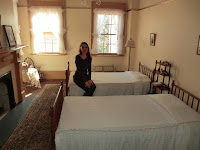 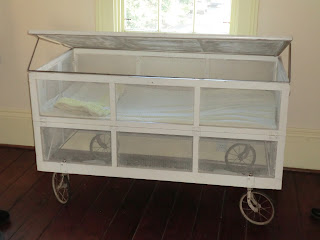 This is a children’s coop. Babies and toddlers slept inside to help protect them from mosquitoes, which spread yellow fever. When Flannery was older, she repurposed the coop. An indulgent aunt bought Flannery a bantam rooster and hen for pets. Although the chickens belonged outside, Flannery put her chickens inside the children’s coop and could wheel them wherever she wanted.

BTW, did you know Flannery was famous long before she wrote? She taught her rooster to walk backwards. Her indulgent aunt (also wealthy and well-connected) made a phone call and a film crew came from New York and filmed her rooster walking backwards. The film was a short, which movie houses played before the main movie.

You can watch it here: 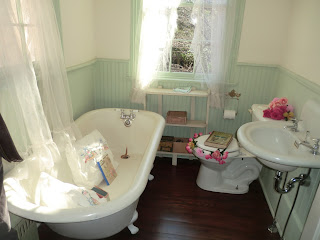 Here is a picture of the bathroom (obviously the commode is recent). Flannery used to fill the bathtub with pillows and decorate the bathroom, including commode with greenery. Then she and her friends would sit in the bathtub and read aloud. Grimm's Fairy Tales and young Flannery's own writing. 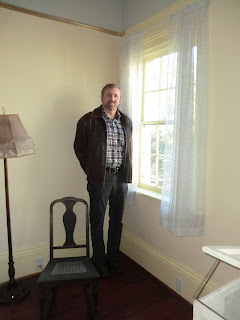 Here’s my husband standing in Mr. and Mrs. O’Connors’ bedroom. There is a scene in one of Flannery's short stories where a child stands out of sight, eavesdropping. Likely, this inspired it. Below this window is a main street and a beautiful square. Flannery may have done some eavesdropping in her time. 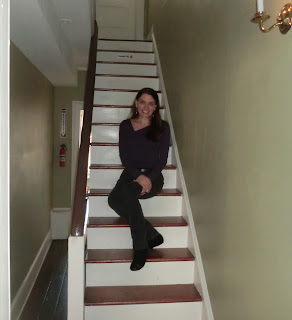 And the staircase in the house. I love stairs.

Below is a final photo (though I have many more). This is a photograph of Flannery reading a book as a young child. I love it.! 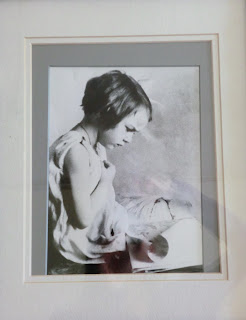 Posted by Connie Keller at 7:30 AM