On Monday I hosted a murder. It was set on June 13, 1940, on the last train leaving Paris before the Nazis invaded. Everyone came in costume befitting the character they were assigned. 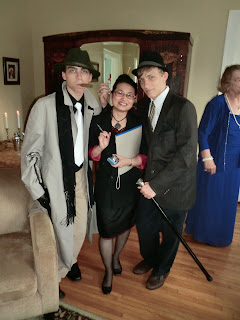 Among the guests were the gangster, the journalist, and the secret agent. 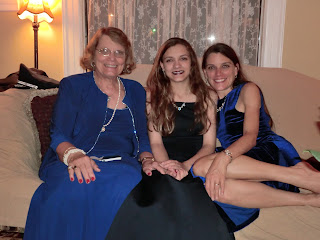 We also had the spoiled perfume heiress, the princess of a minor European country, and a courturiere extraordinaire. 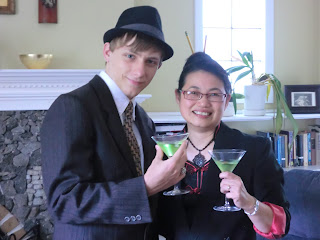 As the train left, we had drinks and discovered the dead body. Ack! 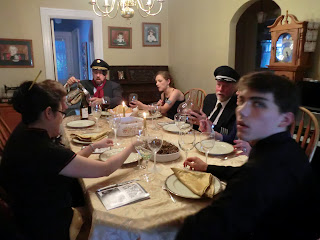 During the five course meal, we asked each other questions, trying to artfully dodge the questions posed to us. Everyone has a motive to commit the murder and you can't lie about the information revealed about your character in your secret dossier.

We opened secret clues and looked over diagrams of the murder scene while wondering which clues were red herrings. And who the guilty party really was.

(Note two other players, the Duke with the eye patch and the RAF Captain.)

Several of the participants had acting experience and were able to stay in character and play up the campy aspects of the game--I haven't laughed so much in months.

At the end of the party, we all had to make our accusations. Two people guessed correctly. I was not one of them. Grumble, grumble. 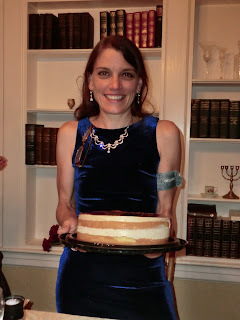 Our fourth course was this decadent dulce de leche torte. (Are you wondering what the fifth course was? Chocolate!)

We're already planning our next Murder Dinner and trying to decide between "The Chicago Caper" and "Roman Ruin."
Posted by Connie Keller at 7:35 AM