We are back from Paris (we had a marvelous time--even better than I'd hoped), and I thought I’d share some of the things that happened while we were there.

If you’ve been reading my blog, you know that the last six months I’ve been working on French to try and revive my 25+ year old language capability. So, I was nervous, but good to go.

After we arrived in Paris at 6am, we left our luggage at our apartment (our official check-in was at 10am) and wandered the streets and markets. We found a patisserie and decided to buy a baguette, etc. In any case, the proprietress was obviously not in a mood to deal with tourists and I took too long explaining to Cal what the various pastry-like creations were.  She was impatient and rude. I was flustered.

So I made the decision that from then on, Cal could speak in English to everyone since they spoke English anyway. Then, we discovered unintended consequences.

We’d go to Metro information. Cal would ask for directions to the Metro headed toward Sevres-Babylone, Les Halles, St. Michel, etc. The person at the information booth would raise an eyebrow, literally turn a cold shoulder to Cal, and speak to me in rapid fire French. I would say, “Merci” or ask for clarification. As this happened over and over, I asked Calvin, “Why are they doing this?” Cal blinked and said, “Because you look just like them, so they assume you are Parisian.” I thought about it. Yeah, a lot of them did look like me. They had the same narrow build, same dark, straight hair, the same shadows under their eyes (which stubbornly resist makeup), and as Cal pointed out they dressed just like I did—in black with a scarf.

Then, Cal said, “You are now the official talker. I’m kind of tired of getting the you-loathsome-American,-why-are-you-foisting-yourself-on-us-and-not-allowing-your-wife-to-speak-to-us look.” I had to admit that was the look he was getting.

So I began talking. People were very nice and helpful. Though occasionally when I spoke I got the you-are-the-confirmation-of-my-beliefs-that-emigration-is-evil-as-it-turns-French-speakers-into-language-barbarians. I wanted to tell them it wasn’t my fault as my French ancestors left 400 years ago for the Netherlands.

Sometimes, people gave me an incredulous look and said, “You speek Ing-gleese?” Even when we were leaving France yesterday, an inspector looked at my American passport and spoke to me in machine gun French. I wasn’t sure whether she said, “So you have decided to leave your mother country? Or, has any terrorist given you a package to take on board the aircraft?” Since the answer and its implication were clearly important, I said, “Uh…” Finally, she switched to English and I was allowed to leave the country.

Yesterday, I streamed an episode of Grimm and a character was speaking French. I whispered to Cal, “His accent isn’t very good.” Yep, Paris rubbed off on me. 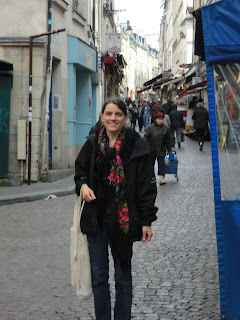 This was our first day when we went shopping. 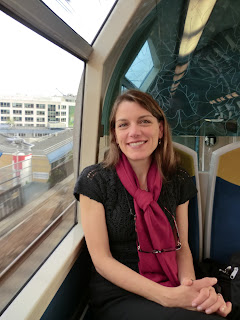 The RER train on the way to Versailles.

Posted by Connie Keller at 8:11 AM