We are on our way to Paris…I can’t believe I’ve written that and that the words are true.

Cal’s been planning it for over a year—you can check out his hard work in the photo below. He’s read every guidebook there is—note the three guidebooks. And see those notecards? Each day’s plans are written on individual notecards, that way the days can be shuffled if there’s inclement weather. Beside the itinerary, each notecard includes directions via walking or the Metro. (Or train stops if we decide against the Metro.) And alternate routes—you know, in case there’s a traffic jam or a strike or a zombie apocalypse and the road to the Louvre is blocked with dead bodies.

Notice the maps. One is covered in a plastic sheath—in case it rains. The other has each day’s route mapped out in red pencil. Possible lunch and dinner restaurants, which have been thoroughly vetted  are marked as well. (The red folder contains prices, menus and reviews of each restaurant, café, and market.) Can you say obsessive?

Not included in the photo is Cal’s MP3 player, which has MP3 audio files that narrate each of the Paris sightseeing walks we go on. We’re bringing along an audio splitter and two sets of earbuds. So we’ll be walking the streets of Paris holding hands, listening to an audio. And, you know, if one of us comes home with a leg in a cast, it’ll be because we didn’t hear the honking taxi. But hey, it’ll be romantic. 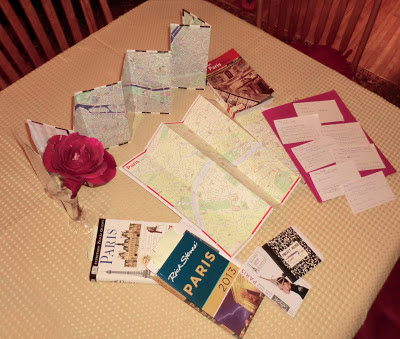 Posted by Connie Keller at 7:23 AM