Today is begins Shakespeare Camp--this year they are performing Much Ado About Nothing. Since auditions in February, Jacob and Matthew have been memorizing lines and working on blocking. I've been sewing costumes. Every day this week, the entire cast will meet and rehearse. Then they'll have performances on Thursday and Saturday.

Here's a photo of Matthew in his Claudio attire. (His tunic is made of brown velvet, which didn't want to stretch the same way as the lining fabric. grrr.) 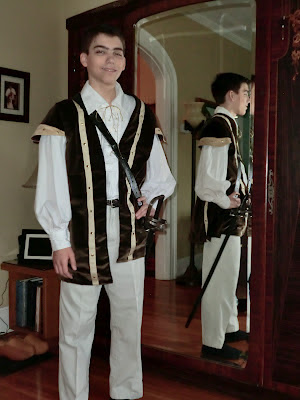 Here's photo of Jacob dressed as Benedick, striking a pose. (Yes, I sewed the hat and gauntlets as well as the tunic and shirt. But I made those last year.) 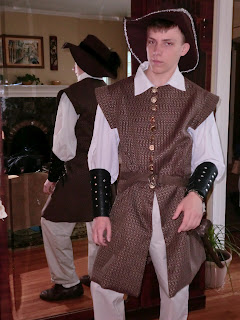