We have a tradition besides the food and festivities of Thanksgiving (which we enjoyed and I have a few pictures to share).  But this tradition causes groans, imprecations, and scowls. It’s the annual Christmas photo.  I usually try to do it on Thanksgiving because:
1. I have a few minutes of down time between when everything is done and when the turkey’s ready and the guests arrive.
2. All the kids aren’t too badly dressed—though Jacob had to be told that a t-shirt that he normally wears to bed does not qualify as “Thanksgiving wear.”
3. I tell them that if we get a good picture, then they don’t have to do it on Sunday morning before church or (assuming they’re not ready early) on Sunday after church.
The six of us went outside.  I explained firmly to the children that I was not going to have the dog in the photo. Imagine more grimaces and gnashing of teeth.  I took eight photos.  Sadly, I did not bring my glasses along so that I could check the photos and make sure they looked good.  When I downloaded the pics to the computer here’s what I found.
Picture One: Not too bad, though some of us look like we need a dose of Metamucil.
Picture Two: I wasn’t in this one—I forgot to set the timer.
Picture Three: The sun came out and Luke and Matt are squinting so hard it looks like they don’t have eyes.
Picture Four: I’m missing again—why didn’t the losers who designed this camera have a “timer feature” that allows the user to take multiple timed photos until I tell it not to?!
Picture Five: The wind started blowing and my hair is in my eyes.
Picture Six: Luke and Matt’s eyes are closed.
Picture Seven: Luke’s snorting and Matt is having a crazed moment. Jacob wants to use that one for the Christmas photo.  Fat chance.
Picture Eight: I barely sat down in time and my hand’s blurry. 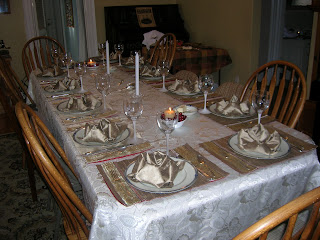 It looks like we’ll be taking more photos on Sunday.  I’m sure everyone will be very delighted. And this time, I’m bringing my glasses.


Here's the table before we had dinner.
Ariel folded all the napkins. 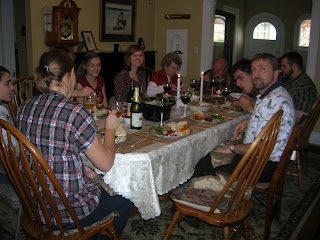 Here we are having dinner.


I know you want me to post the snorting/crazed photo. Too bad. I value my life. Besides, I have to work with these people again on Sunday. :)
Posted by Connie Keller at 1:30 PM