Grin and Bear It

This year we tried to avoid the normal stress and had a visiting friend take the picture right after we got back from church on Sunday. However, there was an issue. Unbeknownst to the friend, there was an odd shadow across the top of my head that blended into my dark hair and made me look, well, a bit odd. I will admit that I’m a little vain, but this went well beyond vanity—I looked like a cone head!

So, we had to take another picture. I thought, “Well, we’ll just do it the next day or so. But then, Cal came down with a nasty cold, the kind that puts you in bed with the covers pulled up. When he got better, I thought, “Okay, today’s the day.” Until Luke got up with a swollen red, crusty eye. Yep, pink eye. After a couple of days of drops, Luke no longer looked like the loser in a boxing match. Finally, it’s time—but, Jacob got sick with the same vile cold. His eyes watered, and his skin took on the tone of spoiled egg white.

This wasn’t going well. It was mid December, and we still hadn’t taken our Christmas picture. It was time—no matter what. I told the kids they could wear whatever they wanted (although the shirts had to have collars). They waited while I tried to get the tripod straight and to remember how to set the auto-timer. Then, I began the photographer commentary: “Luke, put your chin down. Matt, scoot over. Jacob, smile—it looks like you’re sneering. Watch at the camera. Etc.”

Time to take the picture. I pressed the button. The kids yelled, “Hurry, Mom, it’s blinking!” I rushed over, trying to avoid bumping the tripod. Once I was unsuccessful—but it made for an interesting, albeit not Christmas-y, picture. When I did avoid smacking the tripod with my leg, there was always the challenge of squeezing in and trying to have a non-fake smile. And, don’t forget the comments of the other participants: “Oops, my eyes were closed.” “Hey, you’re making yourself look taller than me.” “My knees/back/smile is hurting.” After about ten pictures, I thought, “Okay, we’re done.” I put the data card into the computer and Ariel showed me how to get rid of red eye and so on. Finally, we all settled on a photo and I thought, “It’s over!” But, it wasn’t. One child said, “Hey, Jezebel isn’t in the picture. We need her in the picture.” My fake smile vanished completely. And before I could say, “Have you lost your mind?!,” all the children said, “We need Jezebel in the photo!”

I ground my teeth and said, “Sure, okay”…maybe it’s not the kids who hate the Christmas picture, maybe it’s me.


{Here's the picture we finally chose. (I won't even tell you about trying to get it made into Christmas cards--and how the photo machines at Sam's Club hate me and try to sabotage my cards every year. This year they tried to crop off half of Calvin's head. Thankfully, I was able to save him from the digital guillotine.)} 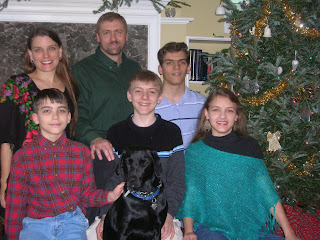