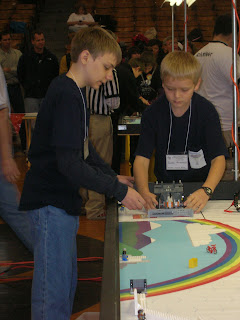 If you developed a chocolate bar that was rich, sweet, deeply chocolate and had no calories at all, not only would 99% of all women pay whatever it would cost, but they would drool while doing so. A new operating system that debugged itself would send computer programmers into a drooling frenzy. And a virtual-reality helmet that worked with Wii would drive teen boys into a pool of drool. But would there be anything that would cause a drool rage among Oakridge National Laboratory scientists, Tennessee Tech University professors, engineers, and boys (and a few girls) aged 10-14? I would have said “no” just two days ago. Now I know that’s not true. There is something that makes them all giddy. It’s called First Lego League.

Several months ago, while I was fixing dinner in the kitchen, Jacob and Matt asked if they could join a robot club with their friends Andrew and David. Like the naïve mother I am, I said, “Sure, honey.” I imagined time spent chatting and hanging out. Then they asked about joining Lego League. Once again I pictured boys sitting around playing with Legos. Soon, I found out there would be a competition, and the team had to register. And the registration was expensive, so that looked like the end of Lego League for the boys—until the Chattanooga Engineers Society put out the money to sponsor the team. At this point, I should have “smelled the coffee.” Instead, I thought, "Isn’t that sweet."

After months of Saturday hours spent building and programming, the boys ended up knowing that “Steve,” as they affectionately named their robot, could perform important tasks like carry a polar bear to a research facility, bury carbon dioxide “balls,” construct and test a levee, bring scientists across the frozen tundra, and propel a bicycle to the research station (although what good a bike does in the Arctic is unclear to me, unless it’s supposed to provide exercise for the scientists). There were about nine other tasks too, but I don’t want to bore you.

Another step in preparation was research. Jacob would yell, “Hey, can I use your computer, I’ve got to learn about ‘urban heat islands.’” No, u.h.i. are not tanning salons or cities like Honolulu or Kingston, Jamaica. At least, not according to Jacob. Matt, on the other hand, studied the feasibility of water-powered lawnmowers. Not practical, but very cool.

So, fast-forward to this Saturday, where we had to get up at 5:30am and drive for two hours to the First Lego League State Championships. The gymnasium filled with parents (more dads than I’ve seen at any baseball game), scientists, professors, and hyper kids carrying robots, presentation props, computers (for last minute programming changes), and printers. This is the ultimate convention for geeks of all ages. So, we began the rounds. Two rounds of robot challenge (where the robot performs up to 15 tasks in 2 minutes and 30 seconds). This is followed by robot construction interviews, teamwork interviews, and team work challenges. Finally, they do their clever presentation on how to conserve energy (which they sung to the tune of the Beverly Hillbillies theme song). You had to be there—it was awesome. Unfortunately, their judge was a climatologist who was clearly miffed that Al Gore won the Nobel Prize instead of her. But, even she couldn’t resist the David/Matthew show (imagine two boys with long eyelashes, puppy dog eyes, and dimples the size of craters). The team scored high on presentation.

Finally, we were down to the third and final robot challenge (it’s now 3:55, or something like that). Andrew and Laura run the robot, and their run is amazing. Then, we wait and wait for the standings to be posted. And then, we wait some more. Finally, two other mothers and I decide it’s time to go. The kids did great, but it’s their first year (some teams have been going for seven years) and we were only 7th after round two. So, we pack up the kids and go home.
Yes, halfway home, we get “the call.” The kids took THIRD in the state championships—and we weren’t there for the awards ceremony! I will never live this down. I’ll be ninety years old, drooling on myself, and still be referred to as the-mother who-left-so-early-her-kids-didn’t-get-to-participate-in-the-awards-ceremony. Oh well, we all have to live something down...
Here is the lego team: Cyberthunder! 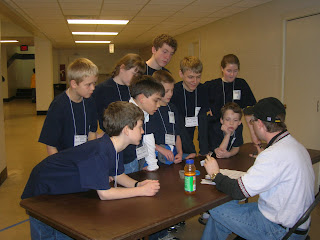 Posted by Connie Keller at 5:35 PM