Mid-July means one thing for me--sewing.

This year my son Matthew is playing Antipholus of Syracuse in Shakespeare's Comedy of Errors. It's one of Shakespeare's earliest plays and it's about two sets of twins separated at birth. It's full of word plays, physical comedy, and puns. 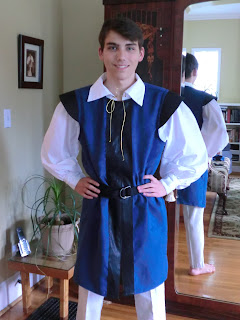 I picked a simple pattern this year McCalls 5907 because Matt is one of twins and so I didn't want someone to end up with a costume that was too hard. I did make some alterations to the pattern. I put in a slit between the middle seam in the front and back to make it easier to move. Matt tends to be very active on stage--I've seen him do a flip before and I didn't want anything restricting his movements (i.e., making him fall). The shirt is one I made a few years back. It's Butterick 4486. I keep hoping that Matt will outgrow it because I want it--it's made from the softest batiste fabric and I'd love it for an oversized poet's blouse.

Here's one of my favorite of Matt's lines:

I to the world am like a drop of waterThat in the ocean seeks another drop,Who, falling there to find his fellow forth,Unseen, inquisitive, confounds himself.

Here's another quote from The Comedy of Errors.