When we were in Paris, we visited lots of cathedrals. My husband Cal knew about the architecture and explained it all to me. “This is Gothic—see the vaulting. This is late Gothic… This is Renaissance.” Interestingly, every church we visited had signs up warning us not to leave any bags unattended and telling us to notify someone immediately if we see an unattended bag. (It was just like the airport warnings.) So there must be some concern about terrorism in the old churches.

Neither Cal nor I gave the warnings a second thought. Until Sacre Coeur. We’d climbed all the stairs, toured the church, and were beginning to go down Montmarte, when a man nearly ran over us and another couple from behind. He jumped the fence, rustled around in the bushes, came back over the fence (without his huge bag!), and ran away.

Cal and I looked at each other. I said to the other couple, “Did he just hide his bag in the bushes and run away?” They nodded vigorously and said, “Yes.”

At that point, I wondered how long we had until the explosion. Clearly, it was a big bomb. Was there time to notify anyone? What would the blast radius be? Could we run fast enough?

Then, the other couple said, “That guy was an illegal souvenir vendor. The cops are cracking down and he doesn’t have a license. So he ditched his stuff and will come back to get it later when the cops are gone.”

Right. What can I say? Writer’s imagination gone crazy. 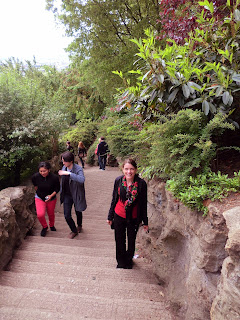 Here are the stairs where the guy jumped the fence and hid his bag of souvenirs.

Posted by Connie Keller at 8:00 AM