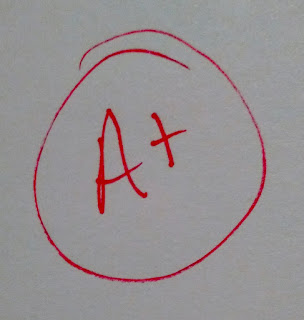 My youngest son Matthew is a sophomore in college. Because he has a college scholarship (covering tuition and books), he is required to maintain a very high GPA. So he’s always concerned about his grades and always he knows exactly what his grade is. Or at least he did. Until he took physics.

His physics professor will remain nameless (though I think he’d be an interesting addition to a dinner party) to protect his innocence. Or guilt.

Prof: That’s not an error.
Matt: But I got a 106.25%.
Prof: But everyone else did badly. The average was a 56.7%. So I put everyone’s grades through a normalizing algorithm. And since you got the highest grade, you lost the most points.
Matt: Oh…
Prof: Yup.

Matt complained long and loudly. At home. (Technically, lots of other people got his points.)

Now it’s the end of the semester and Matt is calculating what grade he needs to get on each of his finals to get As in his classes. Then, he portions out his study time on the basis of those calculations.

Normally, this is a straightforward set of calculations. All the chemistry and math professors have data available explaining the weights and percentages of each test and what scores they consider A, B, etc. Not physics.

In preparation for the final, the prof explained his grading system while Matt cringed and mentally called down imprecations on all persons/things physics-related.
Prof: After the normalizing algorithms, I construct a histogram of all the grades. Then I look at the histogram, considering the chunks. I say, ah, this looks like an A chunk, this looks like a B chunk, etc.

When Matt told me, I (being exceptionally amused) said, “So your prof grades by chunkage?”
Matt: No. My prof is blowing chunks.