Velvet Purse for a Writing Break

The last two weeks, I've been taking a break from my newest novel. (Though not from writing as I had a writing deadline approaching and needed to get my work to the editor.) I finished the first major edit of the novel and wanted to recharge before Edit, Part 2.

So I'm doing some needlework and sewing. I posted photos of a hand towel I embroidered last week. And I finished sewing a purse. 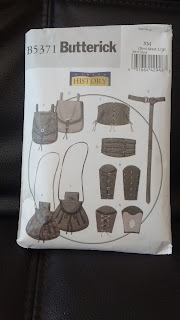 I used this pattern several years ago to make my son Matthew a set of black faux snakeskin gauntlets. And at the time I was intrigued by the "man bag" in the lower left corner. I thought it might make a lovely purse.

The finished project is below. I ended up using elastic cording as a drawstring closure, threading it through tiny buttonholes.  I added a tassel because the weight of the tassel keeps the flap of the purse closed. Also, the rounded trim was not cut on the bias. I cut it with the grain to give more shape to the flap without having to use stiff interfacing, which would make the seams bulky. 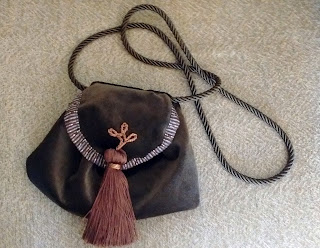 Now I'm waiting for the weather to change so I can start using the purse--velvet doesn't make sense in 80 degree weather.
Posted by Connie Keller at 7:00 AM