On Saturday, Luke went to the regional US Fencing Association tournament in Atlanta. (Luke and two of his friends run a fencing school for kids who are elementary age through high school.) While Luke participated in a few tournaments when he was in high school, he’s never fenced in any USFA tournaments because most are on Sunday and involve substantial driving.

Anyway, we wished him a good time and went about our Saturday routine. In the afternoon, Luke called and said, “Hey, Mom, guess who’s going to the semi-finals?”

Later I got another call, “Hey, Mom, I’m going to the finals!”

I was in shock. The finals?!

I asked Ariel, “Did you know that Luke was this good of a fencer?”

Luke lost the final, but he took second place! (If he had won, he'd be a nationally ranked fencer. Or if two more fencers had shown up, the event would have been big enough that Luke's second place finish would have given him national ranking.) Anyway, we're very excited for him. I’d post a picture of him in his fencing gear with his medal, but he’s already at UTC this morning, keeping students from hurting themselves or blowing things up in the chem lab where Luke has a summer job as a TA.
Here's a picture of his medal. 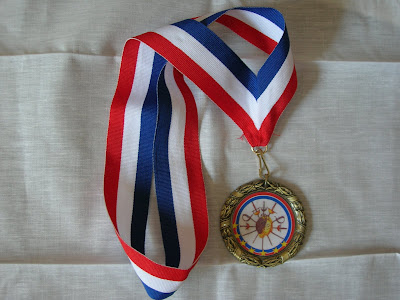 Posted by Connie Keller at 9:07 AM